A Candle Amongst the Stars 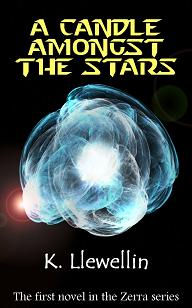 'A Candle Amongst the Stars' is my first novel in the Zerra Series.
The Zerra series is set in the far future where Mankind, in cohorts with other fanatical races, and corrupted by its never-ending desire for power and resources, has formed the Orion Alliance and is systematically destroying planets and enslaving races. However, a brave few are willing to make a stand, and the destructive Alliance is about to find out it can't always have things its own way.
This is a novel for readers with a passion for sci-fi operas. Colourful alien races... big ships... fights... love... passion... redemption... cliff-hangers... they're all here.
A Candle Amongst the Stars - Available from Smashwords
K. Llewellin - Blog

I grew up in the 80's to 00's, during the heady days of terrestrial TV sci-fi. Long-running cult series, combined with re-runs of kitsch 70's shows, ensured I spent my evenings permanently glued to the TV. This had a profound effect on my fertile imagination, and it wasn't long before strange, strong-willed characters were evolving in my mind, clamouring to have their stories told. I ignored them, and somehow managed to get a BSc in marine biology, and a MSc in Marine Mammal Science. But now I've finally given in to the voices, and I'm simply along for the... more