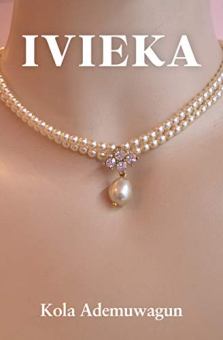 Ivieka tells the tale of a beautiful land in the distant past that was brutally invaded, mindlessly desecrated, and audaciously raped. Set in the old African Kingdom of Benin - the city of blood where Olokun reigned supreme - and modern Lagos, Ivieka tells the story of the violation of a people’s oldest and most sacred place and the theft of an ancestral crown jewel destined never to leave the land famous for her beautiful arts as well as her blood sacrifices.

Ivieka also tells the beautiful love story of Francis Boyo and Indira Lawson who many years after the brazen theft would suddenly find their lives, their future and everything they held dear dangerously imperiled.

In a difficult race against time, Francis Boyo must find the ancient diary of Father Cristóvão Luís and decode his last sermon. But the keys to the sermon are in the ocean deeps, in the head of a mad friar long cremated and buried.

Ivieka tells a beautiful story of the strength of true love in the face of great adversity. It is the story of an almost impossible race to protect mankind against imminent death from a troublesome and choleric crown jewel stolen by a colonial era Consul General when Benin Kingdom was invaded, and the African ancient land desecrated by British soldiers. The crown jewel had been stolen over a hundred years and in that period, it had bequeathed great wealth and affluence to those who possessed it but now it is time to torment not just those who were guilty of the theft and the brutal invasion but everyone within reach of its choleric rage.

Ivieka must be stopped, or many would die from its venoms. The only antidote to its destructive powers is in a diary written by a Catholic priest who had lived five hundred years earlier and had been privileged to see what was to come. But the diary had been written in codes. The urgent task now is to decipher the codes, but the key is in the head of the dead priest.

With people dying mysteriously and the lives of members of the family of his future wife dangerously imperiled, one has already been killed by Ivieka’s venoms and another, a ten-year-old is on the throes of death, Francis Boyo must dare and follow the path first blazed by another man, his boss who had also been killed by Ivieka. Failure would only mean tears and blood and death of domino proportions.

The story is filled with twists, surprises, fear, and nerve-wracking tension as the story raced to an unimaginable end. Nigeria
Kola Ademuwagun wrote the screenplay of award-winning Nollywood movies: Rising Moon, Blood Brothers and Oju Ota - Line of Fire. Rising Moon was nominated in twelve categories and won six awards at the 2006 Africa Academy Movie Awards while he won best screenplay with Oju Ota - Line of Fire at the 2009 Abuja International Film Festival. He also wrote amongst others, the screenplay of Senseless...
Learn more about Kola Ademuwagun

I love this book, especially

I love this book, especially the way the British invasion of the African Kingdom of Benin was told. We had all lived with just Great Britain's side of what happened.

I enjoyed every minute of this book. A great and compelling read. I love the Dax character so much I literally fell in love with him.