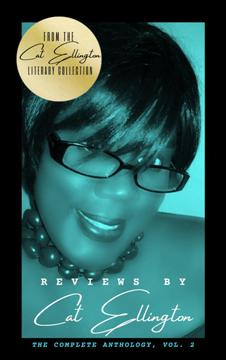 Covering the years from 1996 through 2010, Ellington presents (50) insightful, articulate, witty, and sometimes amazingly humorous literary examinations that kick, push, and shove their way through the psyche from beginning to end. A storyteller in her own respect, Cat Ellington, regarded by many as being one of the best to ever pen a literary review, doles out one impressive critique after another in honor (or dishonor) of both the fictional and nonfictional dialogue alike.

Included in Volume 2 of the standout Reviews by Cat Ellington Complete Anthology book series are the author’s cleverly-written reviews of Another Country by James Baldwin, Boss: Richard J. Daley of Chicago by Mike Royko, Swan by Naomi Campbell, Fine Beauty by Sam Fine, The Picture of Dorian Gray by Oscar Wilde, The Judge by Steve Martini, The House of Gucci: A Sensational Story of Murder, Madness, Glamour, and Greed by Sara Gay Forden, The Mist by Stephen King, Along Came a Spider by James Patterson, and many more.

So settle down, why don’t you, and prepare to lose yourself in the analytical creativity of its wondrously original, ever admired, undiluted, pleasantly fun-filled, and incredibly thought-provoking authorship.

Reviews by Cat Ellington: The Complete Anthology, Vol. 2 is the sophomore installment in the ongoing book series dedicated to Ellington's undying passion for literature and the analytical critique. United States
Cat Ellington is an American songwriter, composer, casting director, poet, author, and entrepreneur from Chicago, IL. She is best known for her creative contributions to the diverse industries and fields of music, movies, art, and literature. Cat Ellington's professional credits list a library of nonfiction books, including the Reviews by Cat Ellington series, The Making of Dual Mania,...
Learn more about Cat Ellington

She did it again! Reviews by Cat Ellington Volume 2 is a great followup to the first book, Reviews by Cat Ellington: The Complete Anthology Vol. 1. This selection of book reviews are more broader and includes works by authors I was not familiar with before( including Mike Royko's Boss ),etc. A lot of her reviews are surprisingly funny and very spot on in showing how each book's plot lines and characters are well connect like a crossword puzzle. Very enjoyable read.