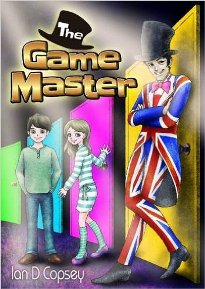 What is it like to be someone else – especially your most hated enemy? Why do they think and do things differently?

Tired of arguing over which of them was the best gamer, Josh and Alex stumbled upon a new video game shop, run by an enigmatic and amiable Japanese shopkeeper. He was to be their Game Master in this virtual reality video game that had no game controls. Little did they know it was a game that would change their lives, of their friends… and enemies… forever.

“Oh! This game is no ordinary game,” The Game Master explained, “It reads your thoughts, seeks out your weaknesses to give challenges that are right just for you, the challenges you need to help you grow.”

"It can read our minds?" puzzled the boys. As they progressed through the game’s levels they found out more about themselves and the lives of everyone around them. Mysteriously, the Game of Life began to spread its influence beyond Josh and Alex’s lives and to their friends.

From Josh and Alex switching roles with each other in the game, campfire frolics and ghostly stories from their teachers, the boys learned more about their friends around them. The Game Master’s zany antics as he hosted a T.V. game show, “Hiro’s Happy Heroes” in the Game of Life, released a string of rib tickling gags, teases and tantalising tattles.

The climax of the Game of Life came from the school Rube Goldberg challenge in which each grade had to join as a team to build their own whacky, madcap contraption. Would Josh and Alex be able to manage to get the two bullies in the class to work within the team?

Patiently, with impish humour, the Game Master guides them through the different levels to a final intriguing twist.

Josh is your normal, everyday twelve year old. He goes to school. He hangs out with his friends. He plays video games and enjoys spending time with his friend Alex. Well, most of the time he does. Josh and Alex are always so competitive that a day of fun ends in raised voices and hurt feelings. One day they decide to settle the score of who is the best at video games. A trip to the new local game store will determine the ultimate winner. There they meet the Game Master and begin to play the ultimate game. The game is the hardest one they've ever played. It's all they can think about. But soon they start realizing things are not always as they seem. They are having the same dreams. Kids at school are acting differently. And it's not so easy to tell the difference between real life and the game. The pace of the story works well to develop the story line and characters without rushing. As a reader, you can relate with these characters and you really want them to succeed. Written for younger readers, this book is based in the U.K. and does contain a few instances of the word "damn" - but which is considered innocuous and is not intended as defamatory. There is no real violence or sexual situations. This funny and well written story keeps you reading until the end. Don't look too carefully or you may have realized you've learned something about yourself and others along the way. Although the story includes a morality tale, it does not detract from the story but enhances it. An excellent book for preteens about fun, life and relating to others. "it is much easier to be nice than not…" Entrada Book Reviews http://www.entradapublishing.com/book_review/the_game_master.html

Reviewed by Lit Amri for Readers' Favorite: Rating 4* In The Game Master by Ian D. Copsey, Josh is a mild-mannered kid who’s trying to fit in with everyone as best as he can. In order not to be picked on or bullied, Josh befriended the least aggressive of the troublemakers, Alex. Alex always wins in video games, so Josh looked up on the internet on how to beat him. When he did, Alex accuses him of cheating and Josh obviously denies it. They agree on a new game to settle their bet to declare the best gamer. A mysterious shopkeeper, who calls himself The Game Master, suggests the virtual reality role playing game called The Game of Life to the boys. The name itself is clearly self-explanatory. The Game of Life is not like any typical combat, sword-fighting game, but it encompasses the player’s life itself. Josh is the first one who realizes this when he ‘wakes up’ after getting hurt in a football game during P.E. There are ‘lights’ to indicate the level of a player’s happiness, thoughts, mood, behavior, confidence, creativity and well being. I’m an avid Sims player, and these features remind me of my favorite simulation game. The characters are relatable and well-developed. I do know boys like Josh and Alex, and I bet other readers will too. Fun and adventurous, The Game Master is also charming, imaginative, humorous and yet very relevant in terms of cultivating ethical values in the younger generation. On the whole, young and older readers will find this book worth reading. https://readersfavorite.com/book-review/the-game-master