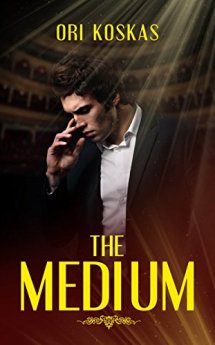 After being injured in the army, Daniel lost consciousness and died clinically. He awoke with the ability to see ghosts -- millions of them, walking among us every day. Once he got used to this new reality, Daniel befriends a ghost named Martin Sandler, who was murdered in the Holocaust while trying to save his family. Martin offers his powers to help Daniel make money. In return, Daniel agrees to find the descendants of any survivors of Martin’s family and give them half of that money. The pair embarks on an adventure filled with fun, danger, and love.

The main character of the book the medium, Daniel Cohen, and the author of the book, Ori Koskas, have a few similar qualities. One is that they both love to dream. The inspiration for the book, The Medium, came from a dream conceived by the author. The book is a wonderful example of how dreams and reality can be intertwined. In our dreams, even the sky is not the limit!

The Medium | Available from Amazon

Ori Koskas is an entrepreneur who focuses on high tech and real estate. Born and raised in Israel, he graduated from the Navy Officers School at age 18 and then went on to serve in the Counter Terrorist Unit of the Israeli army as head of the rappelling forces. After his army release, he founded and managed an international training and consulting company for security and counter-terrorism, which is still operating. Ori is still a consultant and lecturer in the field.
Ori completed his bachelor’s degree in Middle Eastern studies at the Open University in Israel and a masters in... more