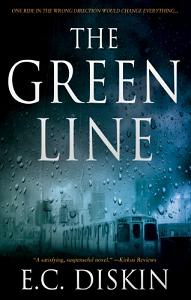 Abby Donovan, a rising star at her prestigious Chicago firm, has spent years sacrificing everything in pursuit of her ultimate goal, partnership. But when she mistakenly boards the wrong train late one night and ends up in Chicago's most-crime ridden neighborhood, everything changes. Abby is haunted by who and what she's seen and is compelled to investigate, despite the professional risks. But her investigation jeopardizes more than her job. Someone is watching. Someone willing to do anything to protect his secrets.
In this debut thriller, E.C. Diskin has created a fast-paced thrill ride that takes readers through the best and worst of Chicago and has them turning pages late into the night. Kirkus Reviews called The Green Line "satisfying and suspenseful" and Windy City Reviews called it "a fast, fascinating read with a nuanced plot and an insightful and interesting look at the practice of law in today's America." After gathering more than 100 4- and 5-star reviews on Amazon and much buzz and local interest in its first few months out, Diskin gained the attention of publisher, Thomas & Mercer. The author has now signed on with T & M for a re-launch of The Green Line in all formats, including audiobook later this fall.
The Green Line - Available on Amazon
E.C. Diskin's website

E.C. Diskin has been writing all her life but she never considered the idea of writing novels until she became an attorney. After years of research and writing and drawer full of story ideas, she finally joined a writers group and began working on what eventually became The Green Line.
E.C. Diskin's website

Great book, very fast paced, I feel as though taking a tour of Chicago. I recognized every street and landmark. Loved the ending.