Tribute: The Dark Side of The Mood 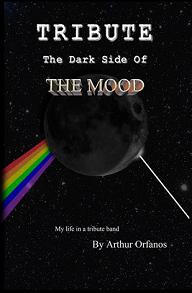 When a Kurzweil employee, (and Berklee College of Music professor) is called in to conduct emergency repairs to Pink Floyd’s equipment during the world-famous Pulse tour, he seizes the opportunity to steal their files, pirating the most recognized sound effects and backing tracks in rock and roll history.
For Pink Floyd fans and music enthusiasts who have the passion for truth, this controversial story is now revealed. Tribute: The Dark Side of The Mood is more than just a story about life in a tribute band but an educational journey of life lessons which exposes a colossal theft that millions of Pink Floyd fans were kept in the dark about—until now.
Tribute: The Dark Side of The Mood - Book Available from Amazon

Arthur Orfanos was born in Cambridge, Massachusetts. He founded the Boston-based band The Mood in 1983 with the late Richard Pontes (1962-1996).

In 1981, Arthur met Mark Rivera who at the time was playing in the band Foreigner. Mark graciously accepted Arthur’s offer to play his Gibson Les Paul onstage at a concert at the Boston Garden.