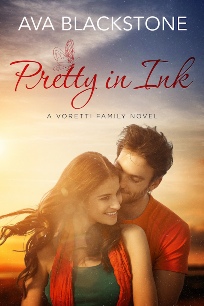 Never close your eyes while you’re getting a tattoo—even if you have a pathological fear of needles.

All Liv Voretti wanted was a small, tasteful butterfly tattoo. What she got was her (now ex-) boyfriend’s name—the worst goodbye present in the history of the universe. With the tattoo about to be revealed thanks to a strapless bridesmaid dress, Liv comes up with a desperate plan to keep her judgmental parents from pulling their loan for her clothing design business. Convince the stable, responsible, incredibly hot family friend—who happens to have the same name as her ex—to pretend to be her boyfriend.

Even with your eyes open, sometimes it’s hard to see what’s right in front of you.

The Vorettis are the closest thing to family Caleb has, and he’s not about to risk that relationship for a fling with Liv. She’d be bored with his predictable, color-inside-the-lines lifestyle inside a week. They’re just not compatible, even if she is the last person he thinks about before he falls asleep.

But when Liv comes to him for help, he can’t say no—not when he’s the reason she ended up with her jerk of an ex in the first place. But as their pretend relationship becomes all too real, Caleb must decide whether he’s going to stick to the plan, or take a chance on a woman who isn’t the person he’s looking for, but might be exactly who he needs.

PRETTY IN INK started with a random conversation between my husband and I as we walked around our neighborhood. We noticed how many places there were to get a tattoo, and my husband suggested that I write a book where the hero got a tattoo of his girlfriend's name, only to be dumped. The book could then follow his quest to find another woman with a name to match the tattoo.

As usual, the book changed significantly from that original idea. Instead of the hero getting a tattoo, it's the heroine--and there are...extenuating circumstances regarding the reason why she ends up with a tattoo of her loser ex's name. I had a blast writing Liv's book, and I hope everyone had just as good a time reading it.

Other books by Ava Blackstone