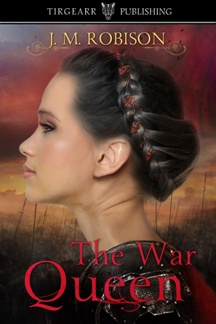 300 years ago, the people dethroned their king and queen to prevent another tyranny. Now instead, the people nominate a State Head every three years and Altarn is the first female to hold the position. She’s used to tolerating the biases of men but Kaelin, the State Head of his territory, has declared her incompetent and has even, according to Altarn, threatened to steal her land – she believes he wants to make himself king. Believing she must “dethrone” Kaelin, Altarn rides to her last ally to ask for aid in the war against Kaelin she knows is coming.  But in her absence an army launches an attack… and it’s not Kaelin’s.

Taking advantage of the unraveling situation, Kaelin kidnaps Altarn so he can take her land without her in the way and brings her to Ruidenthall. There’s a war ship on the horizon, led by a fallen angel craving mortal worship. Kaelin realizes he needs Altarn’s help to fight this army if he’s to save his kingdom. She’s forced to agree, but how will she react when he’s wounded in battle? If she lets him die, can she fight the enemy on her own? Or if she saves his life, will he still try claiming her kingdom, or try claiming her heart?

J.M. Robison is a hard-core fantasy writer who's been writing for 16 years and completed 7 novels. The War Queen is her debut book and she has no other claim to fame; growing up in Bennington, ID (Good luck finding that on a paper map), she didn’t know what wireless internet was until she was 21. Having joined the U.S. Army at 17 with a deployment to Afghanistan and Romania, and working as a Deputy Sheriff, she’s seen a lot of people and been to a lot of places; the evidence of which frequently bleeds into her writing. Her goal in life is to quit her job, write books, and be happy.... more