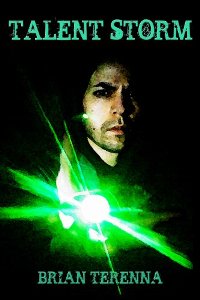 Hundreds of years after the Great World War, America is a distant memory. In the ashes, new civilizations have risen up from the Wilds.

Locke’s Coalition and Liberty Kingdom, bitter enemies, have been at peace for seven years. War is never far from politicians’ minds, though, especially when one is the tyrant Archduke Goldwater. For all of human kinds’ positive traits, the character flaws of corruption, greed, anger, and revenge are etched into our DNA.

In the new world, little technology remains and advanced weapons are in short supply, but today’s soldiers fight with innate power. They fight with Talent… the psionic powers that develop in a random few.

A young Coalition citizen, Jaden Stone, dreams of graduating, having fun, and falling in love. As if his hard-nosed uncle, schoolyard bullies, and exams weren’t hard enough to handle, he discovers that he wields Talent. He’d now be forced to serve in the military, forced to train and fight, all for an organization that killed his parents.

Will Jaden work hard for his people or will his desire for leisure win over? He’s forced to decide when a tragedy shakes his core.

United States
Brian Terenna is a dystopian, fantasy, science fiction, and cyberpunk author. He grew up in a land of possibilities. He saw a path to all of them, but could only pick one. Now, he creates worlds, where fantasy is reality and reality is anything you make it. He is an avid chess player, an expert vegetable gardener, and a meditation master.
Learn more about Brian Terenna

My novel, "Talent Storm” will be free from May 18- May 20 https://www.amazon.com/Talent-Storm-Brian-Terenna-ebook/dp/B00C8DN1LM/

My novel, "Talent Storm” will be free from Feb 23 - Feb 25 https://www.amazon.com/Talent-Storm-Brian-Terenna-ebook/dp/B00C8DN1LM/