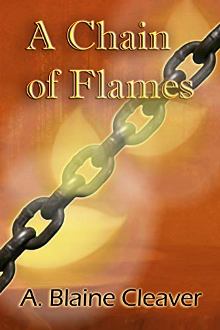 A Chain of Flames is about how different people - some on the front of society and some on the fringe - are able to find their way to something greater  . . . despite their disasters, their difficulties or their levels of malcontent.

Eli Rathebohn is a wounded, lost soul. He’s not really living, he merely exists. Just one heartbeat away from ending his life, Eli decides that he’s not going down alone. He’s determined to take an innocent man with him.

Johnny James is a civil servant—just a modest police Chaplain in a mid-sized southwest town. He has no idea that his simple life is about to change so drastically, that he is about to be tossed so deeply into the fray.

Denise Grayhorn, the daughter of an influential tribal leader, may have just ended her own career as a television news anchor. In a last-ditch effort to redeem herself she accepts a meager assignment. But no one knew that her penance would turn into the most sensational news event of the year.

Jared Suina has been raised on a Pueblo in New Mexico. Young and educated, he finds himself caught between his heritage and a yearning for something more. Will he find what he’s searching for? Does it even exist? In the center of two worlds, Jared gains more than he could ever have imagined.

Together these people will come to realize that life is not a single footpath, but a broad interchange. Where souls are linked and mingled, as in a chain of flames.

The author weaves together the lives of his characters in a meaningful way that illustrates the untapped power of faith, redemption, and love. A Chain of Flames shows us how the seemingly small things in life can become grand adventures. If not for ourselves, then for others.

Author's Preface: There is strength in waiting. True friendships develop over time. Good marriages are nurtured over time. Even harsh indifference can be amended- if only given time.
It seems that the value of 'pause' is something that has been lost to us in the 21st century. I suspect, however, that it began even earlier with the "Me Generation" of the 1970's and then became thoroughly entrenched by the mid 1980's with Generation X - or 'the latch-key kids' of that time. Then, with the help of modern technology - and like a virus - our new impatience mutated into a more malignant syndrome; one of instant self gratification that we find so prevalent among Millennials today. Sadly, the publishing industry was not immune to this progressive illness, and I believe the condition became critical.

As a teenager, who was just beginning to think that he might actually dare to become a writer, I can remember hearing, reading, sensing, that there was a new paradigm being served up. Publishers were becoming less interested in the literary writing style of the classics, but instead were beginning to seek instant action, right from page one, or at least within the first chapter. The idea was to drop readers directly into the conflict, crisis, or climax, without first developing characters, or scenery, or even an intimation of a soon to be revealed plotline. The intent was to 'hook' the reader, who then would be compelled to buy. By then, it didn't really matter if the story turned out to be satisfying prose or merely cheap filler; because the sale had been made. Self gratification seeking readers began to eat it up. Profit minded publishers demanded to be brought more. And so, authors began slicing up and dishing out even more of those crude and undercooked materials for mass consumption.

My book does not follow that recipe. In fact, it follows no formula at all, just as the important connections that we make in actual everyday life do not follow such rote designs and designations. When we meet someone, for the first time, we only 'begin' to know them. We do not know them instantly. Because, to understand their passions and antipathies, their joys and their sorrows, their virtues and their failings... simply ... takes ... time.

This approach - lost method though it is - has been described by one reviewer as, "a little risky for the writer to present his characters in that fashion." While I agree, that my technique in relating my characters to the reader was unconventional by current standards, it was also quite intentional. I believe that it is characters who make the story and not the other way around. So I took my time in building them. I let the story unfold around the characters, and their respective personalities, after we - and they - had had adequate time in which to get to know one another. This, incidentally, is the same method that is employed by the greatest Character Builder of all.

God is in no hurry. God does not deal with us in whizzes, and bangs, nor even in bolts of lightning nor claps of thunder. God is quiet and intimate with us, often whispering more than shouting. God is patient, long-suffering and forbearing. He will often lead us to where He wants us to go by way of the narrower path, where there is little noise and where few will travel, instead of taking us along the wider and louder path, where the throng would naturally go.

That is not to say that there is no excitement in God's teaching us how to relate with Him, and in His teaching us how best to deal with one another. In fact, it can be very exciting, but there are no shortcuts to getting there, and no one does it alone. It is those interactions and lifelong connections which lead us all to greater and better things- not in spite of one another but because of one another! But it simply is not reckless, nor instantaneous.

It is within that spirit that I endeavored to write this novel, A Chain of Flames. It is to show that in all of the seemingly meaningless and meandering moments that make up our lives, God is still there. In all of the abstract encounters and missed meetings, He is still working. He is interweaving and orchestrating every aspect of both our personal and collective experiences. And He is doing it seamlessly, on His schedule, and in His perfect time. He does all of this regardless of who or where we are. He does it simply because of... who He is.

A Story on Heaven and Earth