Allie Strom and the Ring of Solomon 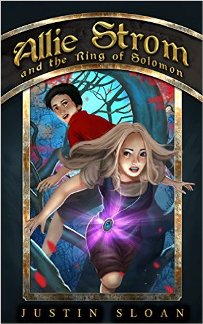 Allie thinks she's a normal kid with normal problems on her first day of seventh grade. She hopes for a fresh start despite her mom being overseas with the Army, again. But none of that matters when she discovers that her mom has gone missing.

On the same day of her mom's disappearance, Allie finds the necklace her mom was never without. When the necklace magically teleports her new friend Daniel and her to Central Asia, she learns her necklace contains an ancient magic; the power of the ring of Solomon, which she must use to fight off an army of darkness and a giant with eyes of fire.

Most important of all, the necklace appears to be the key to finding her mom.

Get your copy now from Amazon

Justin Sloan is a video game writer on such titles as Game of Thrones and The Walking Dead, as well as a novelist and screenwriter. He studied writing at the Johns Hopkins University MA in Writing program and at the UCLA School of Theater, Film and Television's Professional Program in Screenwriting.

Justin was in the Marines for five years and has lived in Japan, Korea, and Italy. He currently lives with his amazing wife and children in the Bay Area, where he writes and enjoys life.