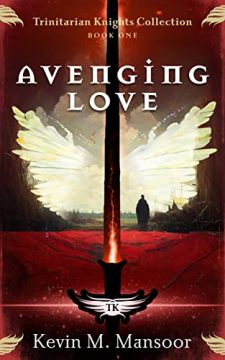 David had always fought to protect others, even before he knew who he was. He defended those that could not defend themselves. In the eternal battle between good and evil, he balanced the scales. He saved countless. . . but he couldn't save her. He failed the love of his life.

After three years drunk in an alley, he still refuses to listen to the truth his heart is trying to tell him. But when. . .

the tequila no longer numbs his guilt,

can the mysterious two-thousand-year-old Emma, or the Archangel Michael, get David to wake up in time?
Join David and his battle companion Saint Bernard, Duke, as they embark on an epic tale of loss, guilt, and possible redemption. As the darkness that has settled on David's soul slowly lifts, a battle that he cannot win awaits. Can David and Duke avenge their loss?

To do so, the very gates of hell await.

Avenging Love is the first novel of the trilogy in the Trinitarian Knights Collection. Filled with fast-paced action sequences, a strong love story sub-theme, supporting characters that will have you cheering, and a pompous prideful Satan that may just have you rolling on the floor laughing, Avenging Love is a must read.

Learn more and watch the trailer at www.KevinMansoor.com

This book started over a decade ago as an oral story for my children. Over the years the characters matured and the story evolved into Avenging Love and then into a trilogy. This is book one of the trilogy. Book two is The Deception of Fear which is also currently available. Book three, Buried Within, is due out in early 2023.

United States
Kevin Mansoor is obsessed. He is obsessed with becoming one of your favorite authors by writing character-driven stories you don’t just read but feel and experience at a deep level. When your favorite character sweats, he wants you to wipe your brow. When they laugh, he wants you to laugh, and when they have chest pains . . . well, he prefers if you just stay calm at that point. He lives...
Learn more about Kevin M. Mansoor