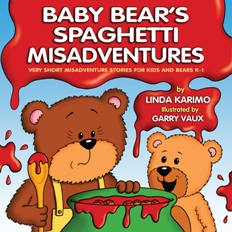 When I am asked about what my book is all about, I defer to Mama Bear who explains it best.

I’m Mama Bear and have a sweet little bear child, Baby Bear. Sometimes he doesn’t do what I say, sound familiar?

This one particular day when cooking spaghetti and meatballs, Baby Bear bounced his ball against the cave wall.

Baby Bear knew it was on the forbidden list. He did it anyway.

I gave him the look. He did it again.

Find out what happened to my spaghetti dinner and naughty Baby Bear.

Buy on Amazon
Baby Bear's Spaghetti Misadventure | Amazon Paperback
Take a look at what Amazon reviewers had to say
ISBN:
978-1-7348876-0-0

Some parents have told me that they have purchased many E-books and paperbacks for their children in order to try and fill the gap that exists in their daily lives. All this because they can’t hang out with their friends for now.

Shortly before this nasty Pandemic hit, it has always been in the back of my mind to write a series of picture books for young children, which initially would be read to them by their parents. As they grew a little older, they would be encouraged to start reading the text with help from their parents. This was such an important time in my childhood when my Irish grandmother, we called her Nanny, would read to me all the children’s books we could get our hands-on. She was learning English herself.

I was a successful copywriter for many years and had a conversational business way of writing my content. What if I could translate that into stories filled with dialog that would transport you and your little one so that you could live between the pages of the book! Wouldn’t that be something?

I reached back into my childhood and remembered that I was fascinated with the Goldilocks and the Three Bear story. So, I thought to myself, what if I could create a planet of bears that would live their lives the same way that we do, only bear style. Obviously, without the Pandemic. If you and the little one in your life could be transported into that world just for some precious moments each day, would it make a difference for a while?

The stories would be short, certainly not the hundreds of pages in a Harry Potter book or the like. Furthermore, throughout the series, the characters should be present while introducing some other supporting ones in later books.

The two main characters in the series would be Mama Bear and Baby Bear; yup, he’d be around the same age as your child.

I came up with a cute preschool through the first-grade story that both mother and child could become immersed in. And help you as a parent to reinforce the life teachings you are trying to instill into them. I have just launched such a story…

In this 44-page picture book filled with 18 full-colored full-page illustrations with lots of dialogs would appeal to you and your child? The lesson learned by your little one is that sometimes when your child doesn’t listen to you, doing something that was on the forbidden list could actually cause harm for both of you.

You’ll have to make that judgment for yourself. Will it be a hit with you and your peers or not? United States
Children’s Book Author and Vision Educator Back in the Stone Age, well maybe not that far back… When Linda was very young, she learned to read at the knee of her Irish immigrant grandmother. Nannie, as she was known to the family, was just learning English herself. They read all the classic children’s stories together. There was one in particular that became the inspiration for Linda’s...
Learn more about Linda Karimo