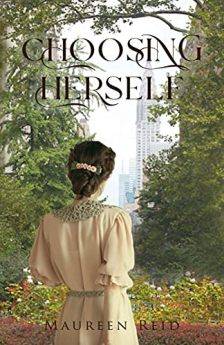 The day hinted of spring long overdue. It was March 25, 1911. In Greenwich Village, the Triangle Shirtwaist Factory was on fire. Nell Walker witnesses young girls jumping to their deaths to flee the flames blocking their escape. The raging inferno kills 146 and sparks an ember in Nell that burns. She vows that the world she lives in must change—a world divided by class, color, and the desires of the heart.

A brave, charming, yet fiercely independent woman, Nell leaves the comfort of her brownstone in New York City to reveal the desperate lives of women and children working in the stifling factories and canneries of upstate New York. Exposing herself to real danger, her reporting introduces her to the headline grabbers of the emerging labor movement and to a reporter with a camera who brings light and shadow to his work and her life.

It is the dawn of a new century. A time when women marched in picket lines, shortened their hemlines, and fought to have their voices heard.

Choosing Herself is Nell’s story. Told in her own words, it is the tale of a woman playing the hand she is dealt and willing to take the gamble on where her life will lead.

United States
Following a career that led her from managing colleges to Fortune-500 companies, to major international law firms, Maureen Reid began writing the kind of novels she loves to read. Blending fiction with historical facts, Maureen is inspired to write about strong women who by sheer will and spirit become the best that they can be. A story-teller, Maureen’s characters have been described as...
Learn more about Maureen Reid