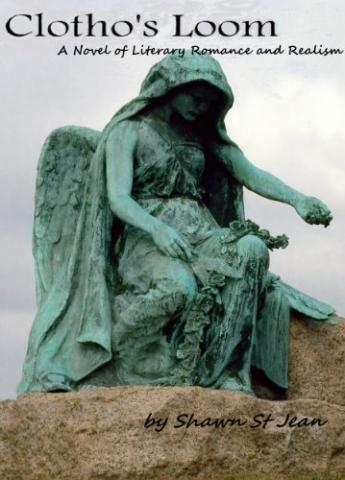 Clotho's Loom (2012) is a BRAND NEW (August 11, 2012) novel of approximately 120,000 words published by scholar/author Shawn StJean. Its subtitle is "A Novel of Literary Romance and Realism."

The present-day narrative is split between two protagonists, William and Nexus Wyrd (husband and wife). Shortly following his thirty-ninth birthday, Will receives a draft notice from the U.S. government to fight in a new middle eastern conflict, between two unspecified Arab nations bordering each other, aided on one side by NATO forces. A former Marine-sniper-turned-History-Professor, Wyrd evades the selective service and is recruited by agents of one of the involved countries, to assassinate a national of their aggressors. Meanwhile, unknown to him, his wife has just decided to announce her pregnancy to him (she is about forty years old, and childless.) A lawyer working at a prominent business firm, she too is involuntarily impressed into service as the personal assistant of the two senior partners, Thomas Wright and Mr. Domino.

The major dramatic tension results from the husband and wife, separated by thousands of miles, each attempting to escape the demands of pasts they had thought to leave behind, and reunite, both as better partners for each other, and worthy parents of their child. The latter chapters dramatize the duality of this external and internal conflict by having each go through a series of symbolic trials. The book erects a progression of parallels that demonstrate that the conflicts of men and women, while superficially appearing at odds, are in fact very similar.