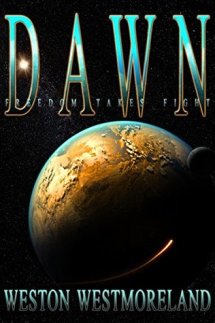 On a planet forsaken by a pan-stellar Empire in times long forgotten, old stories tell of an infamous day when swarms of imperial starships clouded the sky and abducted all able men and women. Nothing was ever known of them thereafter. The planet, known as Arweg, was left stranded, inhabited only by orphaned children, the unlearned elderly, and the helpless. Years went by, the old died, and the children grew to become adults in an ignorant world surrounded by crumbling technology they were unable to understand and much less operate. After ages of darkness, civilization reemerged to a point where a small portion of the little technology preserved in time could be worked.

Two young Arwegians unearth a metallic capsule and trigger a chain-reaction. The strange pod will relay a signal into deep space and summon an immense octopus-shaped starship known as Goddess. The Empire is back, and it wants to restore Arweg to its former status as a full member of the Confederacy. It is the Dawn of a new Era. Or is it?

A voice from the past will warn the Arwegians the real purpose of the Empire is to modernize the planet only to make it suitable for a renewed colonization and slavery. Some will believe it and some will not. The Revolution has begun.

Dawn follows a small group of characters from both sides who will be drastically changed—those who survive—through war, love, loss, courage, compassion, and friendship as the years go by, radical events take place, and hope is almost the only thing left...

This is a mainly story of friendship, courage and love (not only romantic) set on a forsaken world which is about to be somehow reintroduced into the Empire that abandoned it thousands of years before. We will follow the lives of people who have struggled from difficult youths to balanced adulthood only to find their civilization seized by powerful external powers that will force them to fight for freedom. Through love, loss, courage, hate, compassion, and friendship, their personalities will grow and evolve--sometimes for the better, some others not--as all but hope seems lost...

Welcome to Arweg, the scene of a world sized betrayal. United States
Weston Westmoreland was born in the spring of 1972. He is married and father of two wonderful kids. Weston earns a living working by himself as an engineer, teacher, and freelance photographer, but not from writing. In all honesty, even though he enjoys writing in different forums and used to blog every now and then, he does not see himself as a writer. Dawn is his first work of this kind...
Learn more about Weston Westmoreland