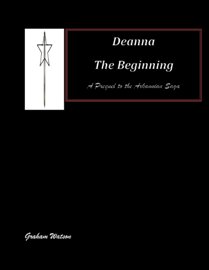 Deanna was a normal girl of 16, or so she thought. This is the year where her life will change, forever. She has no idea, but events are in motion that will alter Deanna's perceptions of life, the Universe and magic. After having the same dream time and time again, the young Deanna resolves to go to the location shown her each night. There she meets an ancient relic of a man, one who can tell her of her unknown past. Deanna will learn of her power, and her destiny, setting the stage for a life long quest - To find her people and Kingdom.

My name is Graham Watson. I was born in Scotland and moved to the US in 2002 to marry my wife Zandra.

I began working on this saga a long time ago. The Chosen one has been through several variations before I self published the version that is now available. It fell short of my cenceptual vision and I chose to rewrite it. During the rewrite I opted to write a shorter prequel based upon Deannas early life - Deanna The Beginning will be available on Kindle.