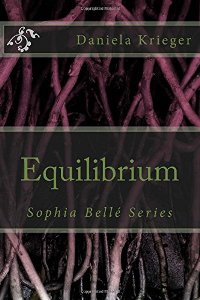 Equilibrium is written in two perspectives. One is the twenty-three years old Sophia Bellé who has lost her Mother, Grandmother and her two Aunts at the age of ten, due to an accident. After the tragic accident Sophia and her Father moved to Virginia Beach to come to terms with the loss. Thirteen years later Sophia lives a happy life in Virginia Beach and her Father is married to Ellen but when she gets the job offer to work at a Library in the French Quarter of New Orleans she decides to move back into the city that has changed her life forever. Shortly after her move she discovers a dark family secret that her father has hidden from her over the years and she finds herself in great danger. Her mother's history is overhauling her and she has to ask herself the question: " How far would you go to save your life?"

After years under the oppression of Maria Butterbee, all that Finley Jackson seeks for is his freedom and he's not caring who is going to die for it. He lures Sophia back to New Orleans in order to buy himself's way out but when he finally meets her in person he has to come to terms with the fact that he can't just let her die. He and his only friend Kylian decide to start a risky two-sided plan in order to save Sophia and a game against the dark and dangerous powers of the French Quarter starts.

Daniela was born in 1988 in Landshut, Germany. She started writing at the age of twelve with short stories about her favorite book characters. After a break the idea of the Sophia Bellé Series formed in 2014. In Spring 2015 she published the first chapter of the series - Equilibrium - as ebook and paperback in an English and German version.
Daniela has been living in London from 2009 to 2010 and is currently living in Berlin.