Fall of the Green Land

Book 1 of The Future History of the Grail
Book by J.G. Follansbee 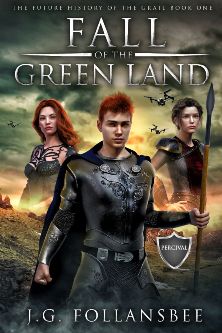 Sir Percival Rathkeale, the red-haired knight of Viridiae, the Green Land, seeks the lost Grail, a powerful device critical to the survival of his king, his country, and the planet. Merlin, the king's chief science advisor, discovers new clues to the Grail's location. The king appoints Sir Percival to a new expedition to find the Grail. With Sirs Galahad and Bors, and Dame Lancelot du Lac, the strongest warrior in the land, Percival sails for the island of Koda, where he faces dark forces determined to oppose his mission and usurp the king. Will Percival find the Grail, restore his country, and save the world?

Fall of the Green Land, the first novel in the fantasy series The Future History of the Grail, re-imagines the King Arthur legends, placing them a thousand years in the future. The second and third books are War for the Green Land and Return to the Green Land.

Buy on Amazon
Fall of the Green Land

Like many young boys, I thrilled at the King Arthur stories, starting with T.H. White’s The Once and Future King, published in 1958, the year before I was born. I also loved any movie with Arthurian themes. I’ll never forget watching John Boorman’s 1981 classic Excalibur at a theatre in Seattle’s Northgate Mall in 1981. Frankly, I found these versions of Arthur, Guinevere, Lancelot, and all the other Arthurian personalities far more compelling than other rising interpretations of medieval fantasy, such as Dungeons & Dragons. The inventions of Geoffrey of Monmouth, Sir Thomas Malory, and various French and German storytellers are timeless, universal and cross-cultural, available to any modern storyteller willing to take them on.

Today’s challenge is finding a new approach to the characters. I’ve written science fiction novels that take place in a relatively near future affected by climate change, which is one of my major themes. I believe humanity faces an existential threat from a warming climate, and I wanted to speculate on how people might adapt in the next century or two. For this new project, I wondered how could I combine the Arthurian legends with the reality of an unfolding environmental disaster. Most modern interpretations of the Arthurian stories place them in a historical past or a more-or-less realistic present. I decided to project my Arthurian characters into the future, a thousand years, to be exact. To my knowledge, very few writers have tried this. I’ll leave it to you to decide whether I was successful.

Figuring out the problems with this strategy took some research. Of course, I watched Excalibur again. I also picked up a few volumes from Powell’s Books in Portland, Ore. The books included Arthurian Myth & Legend: An A-Z of People and Places, a reference I went to again and again. I also purchased John Matthews’ The Arthurian Tradition and The Grail Tradition, which provided invaluable structural and plot help, as well as explaining the original spiritual meaning of the Grail legend. Life in a Medieval Village, by Frances and Joseph Gies, provided some ideas about setting. A video lecture series by Prof. Dorsey Armstrong of Purdue University was priceless in helping me understand the Arthurian narrative tradition. The series is part of the Great Courses, which I accessed through the Seattle Public Library. And then there are countless online articles and websites. A good list of sites is available at the Best of Legends. I found the lyrics for the traditional songs used in chapter 14 of Fall of the Green Land and chapter 21 of Return of the Green Land at the Traditional Music Library. I also took inspiration for the characters and culture of the Lucians from Shakespeare’s Julius Caesar and the HBO series Rome. And what would writers on deadline do without Wikipedia?

Of course, I had enormous help with the project along the way. Editor Melanie Austin helped with structure and characters. My wife Edith Follansbee proved again that I have a habit of forgetting to insert certain words, thinking that people won’t notice them if they’ve gone missing. My friends at South Seattle Fiction Writers read early drafts. More friends at Two-Hour Transport in Seattle suffered through readings of my works-in-progress. Numerous friends and relatives volunteered as beta readers, not knowing what they were getting into. Thank you all! United States
J.G. Follansbee has loved science fiction since the 1960s, when he used to watch the original Star Trek series with his parents. His favorite sci-fi authors include Isaac Asimov, Larry Niven, William Gibson, and many more. He's also a huge fan of Rod Serling. When he's not working on computers, he writes his own brand of sci-fi that examines how we will live in a world with a warming climate...
Learn more about J.G. Follansbee