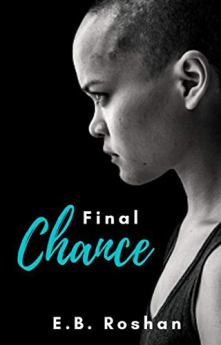 Final Chance is a short romantic suspense story, told from the point of view of Preen, a young woman from the province of Tur Kej, a mountainous region in the war-torn (and fortunately fictional) country of Sevia.

Preen believes Rama, her husband, is dead, killed by members of a rival militia in the fight for control of Sevia's capital, but late one night, her phone rings. It's Rama, and he's asking her to come join him in Dor, the dangerous city she thought she'd left behind forever. Thus begins the story of her search to find him and bring him home again.

She's convinced she's the only one who can rescue him, but it isn't long before she realizes she's the one in danger...

My latest book, Final Chance, was actually not as easy or enjoyable to write as some of the others, because it's the story of a difficult person going through an incredibly difficult situation. I really wanted to write the story, and I felt it had to be told the way I chose to tell it, but when I sat down with my computer and a cup of tea I didn't say, “Ahhh, now I get to write!”

The protagonist of Final Chance is a young girl named Preen. Everyone (including her) believes her husband, Rama, is dead, but when Preen realizes he isn't she goes against her family's wishes, leaves her young daughter behind, and returns back to the city where he'd been living to find him. An early reader of the story summed up Preen very well: “She’s not mean-spirited, but she’s too self-focused in a way, even though she’s doing it for someone else. She also lets her common sense be blinded innumerable times in pursuit of her goal. She could be a really strong character, if she could just get over herself...”

I like to give as many people as possible the opportunity to read my books, so Final Chance is available on Kobo, Barnes&Noble, and Apple Books as well as Amazon. United States
E.B. Roshan has enjoyed a nomadic lifestyle for several years, living in the Middle East and Asia, but is now temporarily settled in Missouri with her husband and two sons. When she's not cleaning, cooking or chasing after the boys, she's writing the latest installment of her ongoing Romantic Suspense series, Shards of Sevia. To learn more about E.B. Roshan and her books, visit: https...
Learn more about E.B. Roshan