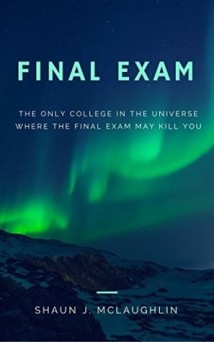 Final Exam begins a series of novelettes, written in the classic sci-fi style of Asimov and Heinlein. (Final Exam is Free on Amazon, Smashwords and affiliates.)

The protagonist, Shane O’Ryan, is an idealistic, rich kid, and a recent graduate of an elite college that trains special agents for the Society, a quasi-judicial galactic power. Shane and his secret fraternity investigate infractions of the colonization charter that protects vulnerable intelligent species and their planets. They risk their lives to make sure that the tragic aftermath of 1492 in the Americas never happens again anywhere humans go.

For his final exam, Shane and his student partner visit a snowy vacation planet to solve a mystery—how could a sub-intelligent species leap 50,000 years in evolution in months to harness fire and develop a language. Their investigation leads them into deadly conflict with a sophisticated gang trying to gain control of the planet for its mineral riches.

The Society Agent series examines human society a few thousand years hence as people expand through our galaxy. In this future, there is no dystopian dictatorship, no cyber-menace overlord, and no inter-species warfare. Humanity faces its historic enemy, humankind, but under different skies. Even as civility and civilization advances through the millennia, greed, gangs and human malice remain as wolves chasing down the weak and vulnerable.

This book, the first in a series, is free on all major ebook retailer sites.

Canada
Besides the Society Agent sci-fi series, Shaun J. McLaughlin has authored two history books and two historical novels, using both a traditional publisher and self-publishing. He maintains a publishing blog, Raiders and Rebels Press, and history blogs on the 1838 Patriot War and Bill Johnston, the Thousand Islands legend. A researcher, journalist and technical writer for over thirty years,...
Learn more about Shaun J McLaughlin