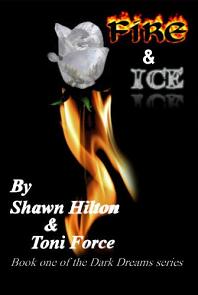 In the first novel of the Dark Dreams series, Fire and Ice, you meet Scott and Armida, two people who feel real in their not so fantastic preternatural lives.
Scott: 20 years ago he was sure that he had found the perfect love that everyone, man or women, in the world looks for, then it slipped through his fingers as she ran on very cold feet. It has made him angry. It has made him cold in his rage.
Armida: She had found the perfect man. He was everything she ever wanted or needed, no matter that her family did not like him as much as she had hoped. Then he changed and became so different that she was scared of losing everything she was to his very dominant heart. No matter how much heat she brought to the table, the fear of the dark and unknown would not leave her.
20 years have passed and the world has moved on, they had moved on. But sometimes the world knows you have to look back and understand the past, before the future can be lived.
Fire and Ice, this new Supernatural Romance, is set in a world that is changing, with political moves that seek to make slaves of the very independent and strong Shapeshifters, A world divided by the need for dominance and control. Based in the beautiful landscape of Michigan's Upper Peninsula. Join the people who have already discovered the Michigan Shapeshifters.
Buy on Amazon
Fire and Ice | Amazon (Paperback)
ISBN:
978-1490952048

United States
I joined the U.S. Army young and began writing as a way to entertain my mind. My stories have romance in some form or another (Even when it is a lunatic Vampire who thinks sleeping in his victim's blood is enjoyable.). I like my characters to have a thread of reality to them. Maybe their actions are fantastic and can stretch the imagination, their personalities, their reasons for their anger...
Learn more about Shawn Hilton