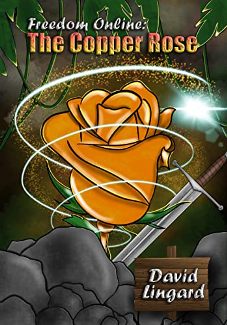 When you enter your game pod to enter the world of Freedom Online, you have a year to be and do what you want. You can play the game in any way you like, fight, craft and grow. But what happens when the scales of balance are weighted against you, in favour of those deemed more important in the real world?

Without rules and boundaries, the human race can be left craving a sense of limits, something to rebel or fight against and without those limits, the bar of what is acceptable is constantly moved - or in this case, removed.

Anyone can be a friend or foe - and in an unlikely twist of events, especially for a gamer versed in MMO, role-playing and strategy games - Tandy manages to befriend a small goblin and begin the creation of his brand new settlement.

The problem is, when the bad guys don’t get their way, they can be very persuasive. And when those bad guys are human? They feel just a little more entitled than others.

So when you have to fight against the worst of humanity, why not team up with the best of the darker races? Sometimes you just have to flip the script and remember: not every book should be judged by its cover.

This story contains kingdom-building, stats, quests, combat stats, and everything you’d expect to see whilst playing a computer game. Also no Harems. Nobody wants a harem set in a goblin settlement.

Other books by David Lingard

Forgotten Past Our Way Home