Girl On A Mission

A Long Walk To Equality 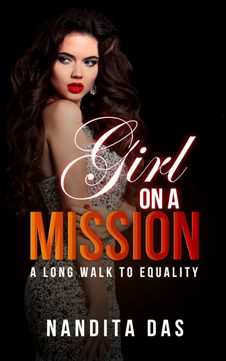 There was no such thing as love at first sight. At least that was what Kalpana had been taught from the cradle. Your parents help you choose the perfect match; you marry him, abide by his wishes and grow to love him. And Kalpana Sen never once thought to think otherwise.

That was until she met Mark Briggs.

“Excuse me, where do I get a glass of that juice you keep sipping on?” she heard the voice and knew the face of the speaker would be as magnetic as the voice.

Despite having prepared for it, she was still blown over by the intensity in those blue eyes. “Ah…Ah, ” she found herself stuttering and was left feeling embarrassed.

“You don’t understand English?” He asked, starting to look embarrassed too.

This quickly healed her tangled tongue. “It is just yogurt spiced with ginger, cloves and turmeric”, she managed to say, at last.

He smiled gleefully. “Oh! How lovely! Such perfect intonation you’ve got, to think I thought you did not understand English, my apologies”. He curtseyed and she was at a loss for words. Without waiting for her reply, he grabbed her elbow, “Let me make it up to you by getting us both more of that, I bet it tastes heavenly”.

And that was how it all started.

Kalpana had never experienced love. She had no examples to learn from. She did not know who to talk to nor what to do, so she avoided passing by his office in the street along the road to her Ma’s spice shop in the market. This was all a new feeling for her and she was confounded.

Tonight, he had invited her to his friend’s wedding feast. She was in a state of anxiety because she so much wanted to go. The only problem was that she could not think of the perfect excuse to leave the house so late at night. Why so late at night? Why couldn’t it have been morning when she could pretend to go to the stall or the corner bookshop?

At the feast, Kalpana was beginning to wish she had not come. There were so many of her papa’s friends in attendance that she had to hide out on the rooftop. The bride was Indian but the groom was English. From rumours flying around, it seemed some members of the Free India Party, to which her father was a prominent member, wanted to cross over to the side of the
English. The bride’s parents were part of this faction.

She was sure if she was seen around and the news got to her papa, she would have more than her secret love to worry about.

This is a book about women empowerment in India. It's shocking to know that a million girls disappear in India, every year. Killed in the womb. Female foeticide, female infanticide. Women in Indian culture have been victims of inhuman violence and oppression for centuries and till a couple of decades back, their condition was pitiable. Belief systems and practices and a regressive mindset have contributed to this evil. Some of these behavioural practices continue even today, like the dowry system which prevails even today despite stringent laws.

In India, women frequently experience bias, oppression and subjugation, both in their family and in their workplace.

Newspapers and TV channels are full of occurrences of violence against women like dowry death, rape, domestic violence, moral policing, assault cases, sexual harassment and so on reported daily in newspapers or magazines. These are issues confronted by women in India, every day. Despite many laws framed with a view of protecting women, this suppression of women continues without end because of the patriarchal mindset and the age-old traditions, customs, conventions, and religion. In most homes in India, equal rights and benefits for women are simply a myth. The financial reliance of Indian women on male members of the family has kept them in a condition of ceaseless servitude. This is the essence of the subjugation of Indian women. She is not treated as an individual, in her own right. Women are still ill-treated in our society due to the medieval mindset.

Also, however, modernization happens, because of traditionalist mentality men don’t help out with household chores. Subsequently, the working women overstrain themselves in attempting to oversee both home and work. Women are denigrated and not given their rights. Women have no freedom of choice. Misogynistic attitude is ingrained in most Indian males, which manifests in numerous ways like gender discrimination, belittling women, male supremacist attitude and violence against women. Indian society is strongly chauvinistic, patriarchal and the callous attitude of political leaders hinders the implementation of stringent laws and measures. There is a drastic increase in crime against women. Our political leaders fail to ensure a safe India for women.

India is now considered the fourth most dangerous country for women. What has made India so unsafe for women? Why can’t women be made to feel more secure in our country? It’s because women are not considered a priority. The dismal record of surging crimes against women attests to this.