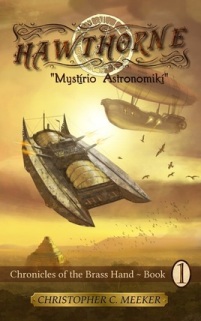 HAWTHORNE: Chronicles of the Brass Hand - Mystirio Astronomiki is the two-fisted tale of Edgar J. Hawthorne who in the summer of 1835, sets out on a journey to investigate claims of a fantastic discovery made by the Royal Observatory at the Cape of Good Hope, South Africa.

Traveling with the Royal Air Brigade on the H.M.A. Stratos, England's newest airship, Edgar and the crew are attacked by marauders. Badly damaged and in need of repair, the Stratos is forced down into the jungles of Africa.

With their airship disabled Edgar, the first officer, and a portion of the crew, set out to locate provisions. In the attempt, Edgar discovers the truth concerning the downing of the Stratos and unearths an astounding secret.

With the aid of an unlikely ally Edgar, now thrust into the midst  of a conflict that has raged for centuries, must do the impossible: protect the future of all mankind.