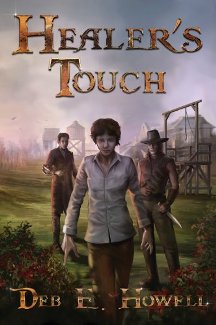 She deals in life and death. He deals death to her kind.

Llew has a gift. Her body heals itself from any injury—but at a cost to anyone nearby.

In a small country ignorant of magic, freeing oneself from the hangman’s noose isn’t a good look. After dying and coming back thrice, Llew drops from the gallows into the hands of Jonas: the man carrying the knife with the power to kill her—permanently.

The last of his warrior race, Jonas is surrounded by the ghosts of his loved ones. At his side, the cursed knife that took their lives. Jonas has learned the hard way that caring for others means their death.

Jealousy of his half-brother’s celebrated strength and speed drove Braph to create the device that gives him the power to perform magic, any magic. But it needs fuel—the blood of a healer...

Healer's Touch is a fantasy novel flavoured with a wild west setting, steampunk-like technology, enough romance to draw you in, horror to keep you hooked, and just enough sex to keep things spicy.

Healer's Touch was my first attempt at writing a novel. I wanted to create characters I would love as much as those in my favourite books (in particular, I was thinking of David Eddings's Garion and crew as well as Diana Gabaldon's Claire and Jamie) and TV shows (Angel & Buffy, and never-happened-but-we-wished-it-did Lou and Jimmy from The Young Riders). Alvaro was actually my first character, until I decided to have a female-led cast, then Llew came along... and finally the rest. I spent 4 and a half years building the story, stripping it back, re-building and finally hitting submit. Is it perfect? Not at all. Is it fun? I think so. New Zealand
Deb E. is a New Zealand author who writes fantasy because it is such a vast genre that can encompass romance, mystery, horror, and horses, of course. At primary school she spent her lunch times as a horse, galloping over woodchips and jumping logs, gutters and swing bridges. At intermediate she learned she would make a terrible mother when her egg rolled from its bed and splattered on the...
Learn more about Deb E. Howell