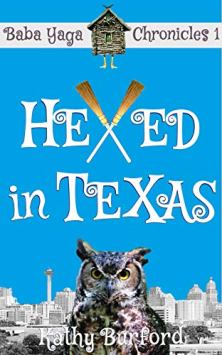 When a Russian witch clashes with the capitalist heir of a voodoo queen, anything can happen!

Baba Yaga has been around since--even she can’t remember when. She normally stays at home in her chicken-legged hut, grumpily awaiting visitors who come to her for help.

M. C. Laveau, the head of Laveau Pharmaceuticals,  merchandizes products that exploit the magic of her grandmother Marie (yes, that Marie).

Hapless bystander Rachel Vargas is caught in the middle, with unforeseen, alarming, and comical results.

Hexed in Texas: A Humorous Fantasy | Buy on Amazon

Kathy Burford loves Tolkien and other fantasy classics. But she also loves comedy, from P. G. Wodehouse to Terry Pratchett. She likes to play around with the tropes and conventions of fairy tales and fantasies. In this series she gives Baba Yaga and her sisters a new twist, while sympathizing with their plight in the face of the modern world.

United States
Kathy Burford studied Russian and comparative literature and works as a freelance editor for university presses. She loves fairy tales and fantasies with a touch of humor, such as the works of Terry Pratchett, Diana Wynne Jones, Tom Holt, and A. Lee Martinez. She and her husband lived in Austin, Texas, for many years and now live in Iowa City, Iowa.
Learn more about Kathy Burford