Hunter, Do the Right Thing 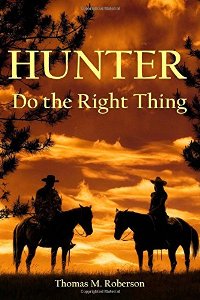 Relaxing on his Texas hill country ranch, retired Texas Ranger, and former county sheriff, Jacob Hunter, is called upon to assist in the capture of Clay Jamison, a young family friend, who was railroaded for a crime he didn't commit and has now escaped from prison. Jacob's wife and family join in his search to unravel the truth behind Clay's troubles. They must all call upon their faith and love in their quest to see justice done. The entire family shows their strength when a killer threatens part of the family as Jacob honors his commitment to do the right thing.

Hunter, Do the Right Thing - Available from Amazon

Thomas M.(Mike) Roberson is a native of Houston, Texas. He and his wife Carolyn, live in Pearland near Houston. They have two sons, five grandchildren, and five great-grandchildren. He began his career as a firefighter at the Johnson Space Center and joined the Houston Fire Department in 1967. Retiring in 1989 as a Senior Arson Investigator, he sought new adventures. Those included: executive security, circulation manager for an advertising newspaper, hospital security manager, expert witness, and engineering manager. He has written poems and short stories for years but only after his... more