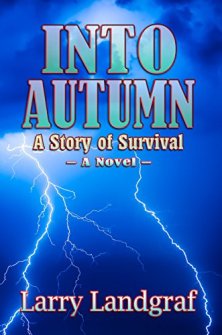 The economy of the United States has failed, government has shut down and the grid has gone offline. There is rioting, killing and chaos everywhere. No internet, no TV, and no utility services. You have no water and little food. You hear gunshots, then banging at your door. You have no gun. What do you do? It is not a question of whether or not this will happen, but when? Could you survive if it happened tomorrow? The lives of Lars Lindgren and Eileen Branson have been turned upside down. Follow their struggle; learn how they must change in order to survive.

Lars Lindgren worked hard all of his life. At age 54 his kids are grown and have moved away to pursue their dreams. Lars decided it was time for him to pursue his dream of moving out of the suburbs. He longed to move to the woods, in the middle of nowhere. He dreamed of moving away from the hustle and bustle of the city life, to sell his business and live the remainder of his life with his wife in the wilderness living off the fat of the land. His wife loved the city, however. She wouldn't, couldn't move away from the lifestyle she loved. When she walked out on him, Lars moved to a 40-acre plot he found in the middle of nowhere. It was perfect. It had a small river running through it, there was an abundance of wildlife and he bought it on the spot and built a cabin there. After nearly three years, Lars still struggled to survive. He was also lonely for the closeness only a woman could supply.

Eileen Branson lived in San Antonio, about a hundred and fifty miles north of where Lars had moved. She had divorced twice and worked as a stock analyst for a stock trading firm most of her life. She just celebrated her 50th birthday. Eileen lived alone and had her daily routine which seldom changed, but when the stock market crashed and the country appeared to be going to collapse and burn, she fled the city. She had read enough apocalypse type books to know what might, what could happen in the city. She imagined her city world was about to come crashing down, and she wasn't about to burn in that hell.

Eileen wasn't nearly prepared for her trek out of the city, and she suffered as a result of her decision to flee. How she found Lars was anyone's guess, but she did. Lars struggled with growing enough food for himself. Now he had another mouth to feed. Eileen did take the edge off his loneliness though. But, Eileen was a city gal. Could she learn the ways of the woods?

With the fall of the economy and the inevitable shutting down of virtually all government, could Lars, Eileen and their neighbors survive the ensuing onslaught of desperate men and women who could not fend for themselves and who would try to take from those who could, namely Lars, Eileen and their neighbors? What would they do in order to survive? How would their decisions change their lives forever?

Lars had a stubborn streak and did not like change. The failure of government services, local businesses and the internet forced him to change. Eileen had lived alone for many years and was extremely independent. She had a stubborn streak as well, and there was the inevitable clash of their personalities. Could she change? Would Lars change and adapt to a new lifestyle which included Eileen?

Lars seems to know how to do everything. Eileen, on the other hand, had no survival skills. She is extremely smart, but book smart, city smart, does not help in building a simple fire in a wood stove, or cleaning fish for a meal. She can cook, but cooking on a wood stove is much different than cooking on her gas stove in the city. There are bugs, snakes, alligators and every other creature in the woods that she is not accustom to dealing with. There are poison weeds and thorny vines which cause her pain. These are small, however, compared to seeing someone shot and dealing with all the new emotions she is now feeling. Change is aggravating for Lars; change is traumatic for Eileen.

Eileen does change over time and Lars falls in love with her. Eileen toughens up and learns to deal with just about anything, even to kill. They learn to survive with each other's help, and in spite of each other's quirks. They help their neighbors and their neighbors help them. Probably their best neighbor is Lars' best friend, Reggie, due to his great care in planning his move to the woods long before Lars arrived here. He spent years preparing to move out of the city and into to the middle of nowhere. Reggie didn't even have a road into his place. He wanted total isolation and brought everything he and his wife Emily would need to live out their lives comfortably without assistance from anyone. He did find that he could not get along without his neighbor and best friend, Lars, due to his wife's addiction. Emily could not seem to go long without Lars' pickled beets. She loved the tangy and sweet beets Lars made, and would trade most anything for this treat. Reggie had plenty to share with Lars and did not hesitate to give Lars whatever he wanted for a jar of beets. Lars didn't have many needs, but when he did, Reggie was obliged to provide whatever he had for his neighbor and best friend.

In time, Lars was reunited with his son, but this reunion was not without tragedy.  Reggie and Emily were also revisited by their daughter who ran away from home when she was a teenager. Men and women have needs and it was inevitable that James and Melissa were united. In spite of all their problems and struggles, James and Melissa survived and produced two healthy boys. Their neighbors across the river also had two kids only slightly older than the newborns. When they grew up into young adults, there was only one problem. There were three boys and only one girl. Debra, the only single girl in the valley chose her mate. The remaining two boys had no choice but to leave the valley in search of women for themselves. This troubled their parents, but Reggie and his huge arsenal and trove of survival gear insured that the boys were well equipped when they decided to leave the comfort of their home and families. Their families were sad to see them leave, but at the same time they had hope the young men would bring back wives to grow their little community.

Lars, Eileen and their neighbors named their little community Peaceful Valley despite the fact that much of the time it was anything but peaceful. There are peaceful and very passionate moments, and though they desire it to be peaceful all the time, there is way too much death and destruction to suit the inhabitants of this little community. Life is not always fair and life seldom goes as planned, but with hard work and persistence everyone can have a good life, even when it seems like everyone is trying to kill you. A strong back and constitution are added pluses. Life's ultimate design is for the, strong, smart, and hard working to survive. A little luck never hurts, but much of the time you need to make your own luck. Lars worked very hard teaching Eileen all he could to insure she would survive. The inhabitants of Peaceful Valley worked very hard to pass their knowledge and skills on to their surviving offspring. This insured they were better able to survive in good times and bad. This is how you make your own luck.