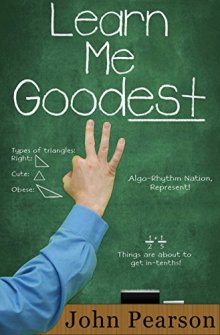 Jack Woodson, the engineer-turned-teacher (and future Dancing with the Stars champion), returns and recounts another school year's worth of hilarious stories, weird events, and outrageous quotes from his quirky group of students.  Jack exchanges emails with his pal and former colleague, Fred Bommerson with funny sign-offs and witty subject lines.

Join Jack as he navigates the tricky maze of overly-distracted students, administrators with bullhorns, and a wife dealing with her own classroom situations.

John Pearson was born just outside of Washington, DC, but moved to Texas as quickly as he could. Growing up with a passion for math, science, and calculator watches, he obtained engineering degrees and basketball (watching) accolades from Duke University and Texas A&M. His first job out of college was designing small solid-state heat pumps, where his cubicle simply was not big enough to contain him. When the engineering market went sour, he decided to try his hand as a teacher, and he educated one diverse group of kids after another, mostly in math and science, but also in Star Wars... more