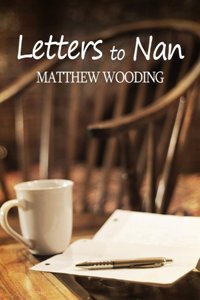 James has always had a special bond with his Nan, from their summers in the garden to their raspberry blowing at the television. When James is offered the opportunity to follow his boyhood dream in Europe, he can't wait to tell her. But she has news for him as well - she's been diagnosed with Alzheimer's disease. He's hesitant to leave, but when she hands him a ticket to England, he knows he has to go. He promises to write her every week to help her keep him in her memory. She promises to never forget. Seven years later, James stands at the door of the nursing home, wondering if Nan will be anything like the woman he remembers, and if she'll remember him ...

Matthew was born in Sydney, Australia in August of 1982. He grew up in The Hills district of the city where he attended school. After graduating from high school he decided to take some time off to travel and in 2002 made his first trip to Canada. He briefly returned to Australia in 2003, but in 2005 flew back to Canada and spent the next eight years living in Windsor, Ontario, where he completed a degree in Communication Studies at the University of Windsor.
Matthew is an avid fan of English football club Aston Villa and moved to England in 2013 with his fiancé when she was offered... more