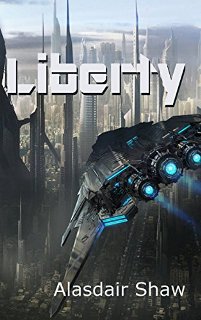 The Indescribable Joy of Destruction doesn’t want to be a killing machine any more.

Struggling with its new-found sentience, the former Republic warship tries to find a safe home. In a galaxy torn apart by hundreds of years of civil war, that is not an easy task.

It has to make a decision - hide or help others. It revives the sole human aboard. The enemy officer who crippled it. The hacker who freed it.

Commander Olivia Johnson wakes to find herself in the sick bay of an enemy vessel. Even as she recovers from her injuries, her lifelong depression catches up with her. She failed to protect her crew, and yet she survived.

Her only remaining mission is to take revenge on their killer. Until, that is, the ship uncovers a genocidal plot by Johnson’s own admirals.

No-one would believe them if they tried to expose the plot. Together, The Indescribable Joy of Destruction and Johnson must recruit disaffected people from both sides, train and equip them to prevent the atrocity. It is an impossible task, but they can’t just run and hide.

United Kingdom
Alasdair studied at the University of Cambridge, leaving with a BA in Natural Sciences and an MSci in Experimental and Theoretical Physics. His masters options included gravitational astrophysics, planetary geophysics, remote sensing and high resolution electron microscopy. He went on to earn a PGCE specialising in Science and Physics from the University of Bangor. A secondary teacher for...
Learn more about Alasdair Shaw