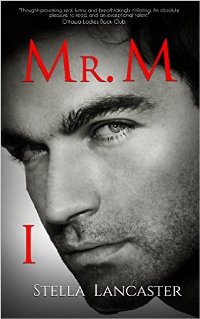 At age thirty-seven, divorced mom Estelle Voss finally feels ready for her next serious relationship. But instead of "Mr. Right," the universe sends her "Mr. M," a handsome, 30-year-old Spanish Dominant, who wants to make all her deepest sexual fantasies come true, but with no strings attached.

Should Estelle pull back, can she pull back, or should she explore, and if yes, then how far? Temptations are strong and risks are high as fantasy and reality both meld and collide.

Stella Lancaster is a professional writer, therapist and single mother, whose mundane life is juxtaposed by her crazy dating life and huge imagination. Her work is inspired by a deep fascination with relationship dynamics and the psychology behind what makes people tick.

"Mr. M" is the first novella in a series. The second novella will be released in March 2016.

She writes under her real name in another genre. Her first book, "The Secret Sex Life of a Single Mom," became a Lifetime Movie in 2014.

She can be contacted via email at Lancaster Stella... more