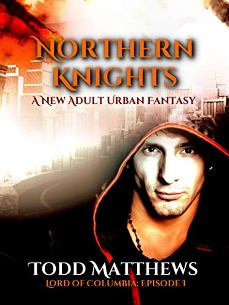 In this new adult urban fantasy, we follow Cain, an arrogant college athlete gifted in controlling the classical elements. Cain’s ambition is to live a life of luxury as a professional athlete and is ignorant of the mass dystopia surrounding him. Such ambition is put in jeopardy when Cain is subject to a military draft used to send college-aged kids to the battlefield as fodder so the empire in which he lives can flex its imperial muscle by colonizing and controlling distant lands for their own special interests.

Later, Cain’s concern turns into a reality when imperial soldiers and police round up every college kid in the region by force to be sent off into the low ranks of the military. Cain and his best friend Lira, retaliate, fighting off the soldiers and freeing cargo vans housing imprisoned youths. That evening, the duo, with the help of friends Micah and Blaze, attack the military conscription lottery itself, becoming fugitives in the process.

Now on the run, the four flee to the last safe haven in the region, Summit University. The Imperials are hesitant to attack Summit due to a mysterious and powerful rebel force known as the Freedom Flames defending the region.

Despite being in a safe zone, Cain’s experience at Summit University turns out more than his life’s ambitions bargain for.

Upon arrival, he’s recruited by the optimistic Freedom Flame leader, Randelo Jefferson, who was impressed by Cain’s antics against the Imperials.

Danger lurks as imperial spies have snuck into the region and are busy carrying out assaults against Summit’s students. Their job? To carry out terrorist strikes and assassinations to clear a pathway for an imperial invasion.

Cain’s not safe and his personal challenges are as mental as they are physical.

He’s forced to face a dark past which he used sports and his cocky demeanor to cover up and kill the very memory of. As unfortunate events plague Summit University, the torments and nightmares of such a frightening early childhood life return tenfold.

Yet, Cain finds he’s not alone in warding off his old demons. He befriends a kind and talented native girl, Savannah, who has faced brutal discrimination from the Imperials all her life as Lira spills to him her own disturbing past.

Along with his cousins Jed, and Asha, plus classic bad boy best friend, Blaze, Cain and the crew seek to balance sports, campus life, and now Freedom Flame activities into defending Summit University from an increasing imperial threat as war drums beat after a twenty-year hiatus.

Will they survive the encounter?

On July 4th, 2015 I watched Sons of Liberty and thought to myself how I could make a story out of it in modern times yet in a fantasy atmosphere. Hence, Northern Knights was born. I drew influences from my favorite books, TV shows, and movies, crisscrossed them and came up with a story about an arrogant college athlete gifted in element control who reignites a colonial uprising.

Now that I knew the story, I just had to learn to write! So after three years of starts, stops, sputters, and stalls, plus a few awesome courses from well-known authors, Northern Knights was finally finished.

So go ahead, enter the first few pages, and get ready to embark on a Hero's Journey.

United States
Todd Matthews is a—okay, talking in the third-person is weird, so hi, I’m Todd! I’m a professional Thought Criminal who hides behind a screen and pens random thoughts regarding liberty. When I jumbled my thoughts together, I created Northern Knights, Episode I in the Lord of Columbia Series. Well, that’s about all there really is to know, so let’s embrace liberty!
Learn more about Todd Matthews