Origins Of The Magdon: Vercovicium 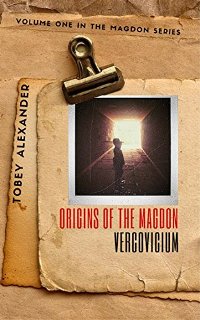 Dare to enter the darkness and remember your sense of adventure.

Have you ever wondered what else there is beyond the stories and myths you know? You may not have heard of The Magdon but it is there, in the shadows always watching and waiting.

Hadrian's Wall, Summer 1911 Archy is given the chance to spend his summer at the excavation of a Roman Fort called Vercovicium. One fateful day Archy stumbles across a buried tomb. Braving the dark Archy sets off in exploration and discovers a long forgotten part of history. The events of that summer open a new adventure to Archy that will change him forever.

Origins Of The Magdon: Vercovicium marks the first in a series of episodic adventures following Archibald "Archy" Skevington as he struggles to find out the truth behind the hidden monster. Archy's first encounter happens when he is only sixteen but the adventure lasts for the rest of his life.

The whole idea of the Magdon came about when my youngest son as a toddler asked me what a noise was in the woods as we walked home. Instead of telling him what it was I made up the idea of the Magdon and since then it has been part of our family adventures. Between this and the constant questions and my sons have grown up I have created a whole mythology and background behind the monster. It was during a conversation with one of my children's teachers that I was told how much I had captured my children's imaginations and they encouraged me to write the story down. As a result I... more