Book by David B. Seaburn 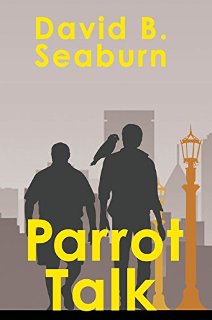 PARROT TALK is the story Lucas and Grinder, two brothers living in Rochester NY, who were abandoned by their mother when they were barely teens. They never hear from her again. They are understandably surprised and confused when a friend of their mother contacts them after thirty years to say their mother has died and to ask them to come to Pittsburgh to deal with some of her effects, in particular, Paul. A road trip ensues with a memorable stop at a Racino, a Pittsburgh landmark greasy spoon and finally a ride on an incline to meet their mother’s friend, Janice. They are more than a little taken aback when she introduces them to Paul, an African grey parrot in the depths of grief, who has things to say that will change their lives. This is a humorous story with a deep heart. It addresses issues of brotherhood and family attachment, loss, grief, love, and reconciliation. It will make the reader laugh and cry....but mainly laugh.

In two of my earlier novels, Charlie No Face and More More Time, I occasionally used humor to vary the tone of the story and to make it more engaging for the reader. But in writing Parrot Talk, I made a conscious decision to write a story in which humor was the dominant tone, the pervasive voice of the novel. I also decided to make Parrot Talk a dialogue driven story in which character development and narrative movement were the product of conversation.

The main (human) characters are Grinder and Lucas, who are brothers. Before starting the novel, I wrote several scenes for the brothers so I could “hear” them interact and get a sense of how they might be humorous without intending to be. I think that works best. Effective use of humor is not about writing jokes and being silly, it is about being able to show aspects of peoples’ personalities and their conundrums that, when looked at from a slightly different angle, are humorous, in part because we identify with the characters and what they are dealing with.

The themes in Parrot Talk, which include maternal abandonment of children, paternal alcoholism, abuse, and grief are serious subjects that could easily overwhelm a reader unless they are addressed in a creative way. I used humor to expand or deepen each of these themes, sometimes being able to speak to them in ways that might not have worked if I had been more somber or grave. In some instances, humorous scenes are followed by more poignant or serious interactions, often helping to heighten the meaning of what was transpiring between the characters.
Juxtaposing the dark and the light aspects of life, placing them side-by-side, mirrors life more accurately, and helps humanize characters and the dilemmas they are facing. As a result, characters tend to feel more “real” to readers; and by “real” I mean that readers can find themselves in the characters and the situations they are facing; they can see some truth in the failures and triumphs unfolding in the stumbling balancing act of the characters’ lives.

I think that most fiction is autobiographical to some degree; not that writers are always writing about themselves, but through their writing it is often easy to recognize the writer’s voice and learn what the writer is wrestling or dancing with in his or her life. There is no doubt that my personality is both light and dark. I can be quite focused on the half-empty aspects of life, while at the same time seeing the humor and effervescence life. In this book, I tried to marry those aspects of myself in a way that I haven’t before. I think this blend created an honest, and hopefully, truthful perspective on what it means to be a person trying to make his or her way through life.

About David B. Seaburn United States
David B. Seaburn’s first novel, Darkness is as Light, was published in 2005. He followed with Pumpkin Hill (2007), Charlie No Face (2011), a Finalist for the National Indie Excellence Award in General Fiction, Chimney Bluffs (2012) and More More Time (2015). His latest novel, Parrot Talk was released by Black Rose Writing in May 2017 and placed second in the TAZ Awards for Fiction (2017)....
Learn more about David B. Seaburn