Rarity from the Hollow 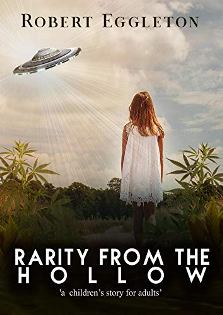 Lacy Dawn's father relives the Gulf War, her mother's teeth are rotting out, and her best friend is murdered by the meanest daddy on Earth. Life in the hollow is hard. She has one advantage -- an android was inserted into her life and is working with her to cure her parents. But, he wants something in exchange. It's up to her to save the Universe. Lacy Dawn doesn't mind saving the universe, but her family and friends come first.
Rarity from the Hollow is adult literary science fiction filled with tragedy, comedy and satire. The second edition was released on November 3, 2016.
“The most enjoyable science fiction novel I have read in years.”
—Temple Emmet Williams, Author, former editor for Reader’s Digest
“Quirky, profane, disturbing… In the space between a few lines we go from hardscrabble realism to pure sci-fi/fantasy. It’s quite a trip.”
—    Evelyn Somers, The Missouri Review
. "…a hillbilly version of Hitchhiker’s Guide to the Galaxy…what I would have thought impossible; taken serious subjects like poverty, ignorance, abuse…tongue-in-cheek humor without trivializing them…profound…a funny book that most sci-fi fans will thoroughly enjoy." -- Awesome Indies (Gold Medal)
“…sneaks up you and, before you know it, you are either laughing like crazy or crying in despair, but the one thing you won’t be is unmoved…a brilliant writer.” --Readers’ Favorite (Gold Medal)
“Rarity from the Hollow is an original and interesting story of a backwoods girl who saves the Universe in her fashion. Not for the prudish.” —Piers Anthony, New York Times bestselling author
“…Good satire is hard to find and science fiction satire is even harder to find.” -- The Baryon Review

Half of author proceeds from this project are donated to the prevention of child maltreatment: http://www.childhswv.org/

Rarity from the Hollow - Kindle from Amazon

Rarity from the Hollow - Nook from Barnes & Noble

Rarity from the Hollow - Lulu

Rarity from the Hollow - HostingAuthors.com

I began writing nonfiction in 1978, shortly after having been awarded a Master’s Degree. Dozens of my works have been published and many are now archived by the West Virginia Division of Culture and History. They cover elements in the field of child welfare: investigative reports, service manuals that were nationally distributed, research…. In May of 2015, I retired from my job as a children’s psychotherapist after forty years in the field. I started writing fiction after work in 1996. Three short stories were published by magazines before my debut novel, Rarity from the Hollow. But most... more

For a limited period, the eBook version of Rarity from the Hollow, an adult literary science fiction adventure, not for the prudish, continues to be on sale for $2.99 and the Paperback is on sale for $16.94. https://www.amazon.com/Rarity-Hollow-Robert-Eggleton/dp/190713395X/ (104 Book Reviews on Amazon). Author proceeds contribute to the prevention of child maltreatment: http://www.childhswv.org/ Project Updates: https://www.facebook.com/Lacy-Dawn-Adventures-573354432693864/

Touching Base: Rarity from the Hollow

Happy Holidays! After Christmas, the publisher is going to make the next deposit of author proceeds from the Rarity from the Hollow project into the nonprofit agency's account for the prevention of child maltreatment. Millions of American children will spend this holiday in temporary shelters. A lot more world-wide are likely to spend their respective "holidays" in worse conditions. Having once been the director of emergency children's shelters in West Virginia, it is still heartbreaking to think about children not having a "real" family during Christmas. I remember the faces, the smiles and thank yous for the presents from staff, but…. I also wanted you to know that the novel received a very cool review by Amazing Stories Magazine. This is my tweet: “Amusing at times, shocking at others, a touching and somehow wonderful SFF read.” Full review by Amazing Stories Magazine: http://bit.ly/2kbsAlV On Sale for Christmas: http://amzn.to/2lF5BPS Proceeds help maltreated children: www.childhswv.org Thanks again for the post. I just shared the link to it again on social media. Take care, Robert https://twitter.com/roberteggleton1 https://www.amazon.com/Rarity-Hollow-Robert-Eggleton/dp/190713395X/

2018 Edition of Rarity from the Hollow

The 2018 Edition of Rarity from the Hollow Paperback is now on Amazon: https://amzn.to/2LfzP84. It is also available for Any eReader: https://bit.ly/2KNJkI2 Proceeds help abused children.

Rarity from the Hollow has a new website: https://www.hostingauthors.com/books/RarityfromtheHollow Thanks for your help.