Talon, come fly with me 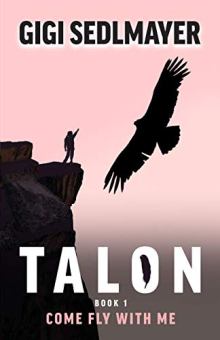 Nine-year-old Matica lives in a remote village on a dry plateau in the Andes of Peru. She moved to Peru when she was five with Australian missionary and schoolteacher parents. Because Matica is trapped in the body of a two-year-old, her growth handicap has caused her to be rejected by the local people and they would not accept her into their community or allow her to play with the children.

With patience and a sense of adventure Matica befriends a pair of condors. A strong bond and love develop between them.

Matica rescues the egg the condors, Tamo and Tima, are trying to protect from poachers and nurtures it to hatching. The egg hatches on her 10th birthday and she names the new fledging Talon.

Many adventures unfold, including her finally being accepted into the local community. And something totally unexpected...

This is the beginning of many incredible adventures with Talon and Matica. It is a story of hope, determination, and love.

Living in the remote village on a dry plateau in the Andean mountains, Matica, rejected by the locals, while handicapped, befriends a pair of condors, with patience and a sense of adventure.

“Teaching Children Self-Confidence through Service to Others.” Children today face immense pressure to fit in with their peers. This pressure is leading to record rates of depression among preteens and teenagers and this to suicide. Parents look for ways to build their children’s self-esteem; however, teens look to their peers and popular culture for acceptance rather than their parents. This puts parents in a challenging situation. Most children of this age group have issues with acceptance and this is explored and resolved in a positive manner within the story line of the Talon series, Matica shows children and teens that they can overcome great obstacles with love, patience and a selfless attitude toward helping others and experience exciting adventure on the way.

I wanted to let children and parents know that they don’t need to suffer more than they already do. So:
Children suffer from all sorts of afflictions and through my book they can learn how to coup with everything, as Matica did, the main character in my TALON books. She had to learn it in her early life. Children can find a “Condor” as Matica did. Not literally a condor, but every child or adult for that matter, they are battling with incurable afflictions, should find something that let them forget what is happening to them. Finding a “Condor” would help them to overcome that.

Parents can read my book to younger children so they can see that they are not alone, but that they can overcome it in a positive way, not in a negative way.

Other books by Gigi Sedlmayer