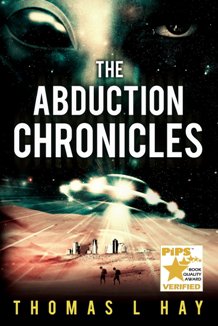 A story that explores a compelling blend between some true life events of the author blended with his seemly vivid imagination.
Who are the abductors? Where do they come from? Where are they hiding? Do they even exist?

What actually occurred that evening in 1960, when the ‘Kid’ lost control of his car, crashed, and lost three hours of his life? Was he abducted, or was it just a freak accident? What occurred a few years later when his first wife told him they were abducted by aliens, not once, but twice?

She would claim the abductions were revealed to her after their divorce. Her spirit persuaded her to become a vegetarian, fast and abstain from sexual activities. This melted the memory blocks instilled by the aliens during the abductions and exposed traumatic experiences that were buried within her subconscious.

After writing his original memoirs, The Comeback Kid, he suspected he could have similar mysterious phenomenon buried within his subconscious. He became tormented to investigate the probability, so he adopted a similar ascetic lifestyle.
Oh-My-God.

Melting the abductor’s memory blocks exposed many secrets. Who the abductors were, where they came from, and where they were hiding was revealed. It is an adventure filled with action, mystery, suspense, romance, comedy, and ends with a revelation that might torment your reality.

Most of my life I have had an inspiration to write a novel. Unfortunately, I never found the time to fulfill that dream. After retiring, time was no longer an excuse. The subject became the obstacle. To get me motivated, my wife suggested I write my memoirs. “You have had an interesting and complicated life,” she commented. “It would make a good story.”
The more I thought about it, the more it made sense. After all, I am the only person who knows all my memories. When I pass, they will be lost forever. Recording them would mean that I would live forever. An added bonus would be that my descendants would have a history book to learn where their idiocy originated.
I started writing my memories in a big paper notebook. After fifty pages with arrows pointing every which way and notes scribbled everywhere, I had a complete genuine mess on my hands. Again, my wife came to the rescue. “Why don’t you get a computer?” Duh! Brilliant idea, honey! But then the computer and I had issues. Lots of issues! Until we finally came to an agreement that I take a class and learn a little more about it. We still had issues, but they can usually be resolved. It still took me two years to complete the memoir. Behold: The Comeback Kid, The Memoirs of Thomas L. Hay was published in November 2011.
The process was both an invigorating whirlwind of self-enlightenment and an intense emotional trip. To jog my memory I used song titles. A song would remind me of a person, a place, or a time in my life events. Example: “Heartbreak Hotel,” when my first wife informed me that she wanted a divorce. When I looked at my life, I recognized that it was but a series of events, much like an assorted box of chocolates, never knowing what would come next. I chose the title ‘The Comeback Kid” because of the many peaks and valleys I had during my life’s journey. Somehow I had always found a way to comeback from the valleys.
After publishing my memoirs, it occurred to me that I might have some mysterious phenomena buried within my subconscious. Shortly after our divorce, my first wife claimed that we had been abducted by aliens during our short marriage. She divorced me because her spirit had persuaded her to become a vegetarian, fast, and abstain from sexual activity. According to her, this ascetic lifestyle melted the memory blocks instilled by the aliens and exposed traumatic experiences that had been buried within her subconscious. I didn’t believe her. Like most people who claimed to be abductees, I assumed she had a fertile imagination or had a few loose marbles.
However, after writing my memoirs, I became tormented to investigate the probability of her claim. Since I could stand to lose a few pounds and age had diminished by sex drive, I adopted her ascetic lifestyle for awhile. O-M-G...You're not going to believe what I discovered.

United States
Raised in the Golden Valley of Clinton, Missouri in the fabulous 50's. VietNam Veteran. Retired from TWA/American Airlines. Published four books. When he is not golfing, fishing, or singing Karaoke, he enjoys spending quality time with family and friends. He currently lives in Lake Waukomis, Mo. with his lovely wife Karen, some hyperactive squirrels, too many irritating geese and a few cranky...
Learn more about Thomas L. Hay