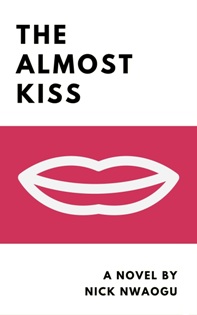 The Almost Kiss, set in modern Nigeria, narrates the story of Chioma Okafor who is pressured by her over-ambitious mother into an unwanted romantic relationship with Uche, a young, sophisticated university lecturer. Chioma yields to her mother's pressure, hoping she would eventually fall in love with Uche as her mother had assured her, but she never did. On a Valentine date with Uche, she gets a glimpse of what her relationship has been missing as she feels love for the first time with Emeka, a handsome stranger who's unfortunately expecting a baby with Amara, a girl who Uche used to date in his university days.

Shocking and ugly truths are set loose that night.

Uche turns a relationship that he intended to blow up into an engagement to Chioma on Valentine's Day, into a blood bath before midnight. Chioma who survives the near-death experience, narrates her Valentine dilemma to Femi, a clever Police Sergeant. Everybody thinks Uche died that night, but Femi discovers a strange text message sent from Chioma's phone to Emeka, which triggers a series of twisted events that proves that the jealous and malicious Uche is still alive, and that the life of Chioma is now hanging down by a thin thread.

The ultimate question is: 'Since Uche is still alive, then who is the man laying lifeless in the mortuary?'

Chioma is certainly not pleased with the answer. Femi forcefully becomes Chioma's personal bodyguard, while he hunts down Uche, an innocent-looking man who he met a day ago and poorly judged. Follow Femi as he uncovers an intriguing murder mystery that nobody even knew happened.

Romantic suspense novels account for only seven percent of the romance novels in the market. That's a lacking figure, and I hope many writers inthe near future, decide to write more romantic suspense. In The Almost Kiss, together, Femi and Chioma solves Emeka'sValentine-day murder, and on doing so, Chioma is exposed to Femi's heroic personality,which makes her eventually fall for him. This is a novel on how crime brings two love birds together.

I have always enjoyed reading romantic suspense, partly because it intrigues me, but mostly because I'm always anxious on how the protagonists will solve the mystery at the end, so I thought it was time to write a romantic suspense myself. Exactly a year ago, I wrote a contemporary romantic short-story of same title. At that time, it was a standalone story that ended when Chioma found out that her crush Emeka was expecting a baby with his girlfriend Amara. Ever since, I knew that someday I would write the complete story, and here it is.

The Almost Kiss is a story of true love, which begins and ends at a single site. Chioma and Emeka meets at a restaurant on Saint Valentine's Day and instantly fall in love. Unfortunately, before the end of that very day, Emeka is killed by Chioma's boyfriend Uche, and Chioma never gets to see him again. This should be an author's note and not a spoiler, so I'll leave you to read the story yourself. Nevertheless, I want to thank you for purchasing this book. I'm optimistic that you'll enjoy reading it just as much as I enjoyed writing it.

Nigeria
Nick Nwaogu is a Nigerian writer, blogger, physicist, and computer programmer. Before starting his writing career, he’d already made a name, locally and internationally, as a seasoned Internet entrepreneur and tech savvy. At 19, he co-founded an exclusive social network for students of his university, which later expanded and grew to over one-million registered members in less than three...
Learn more about Nick Nwaogu