THE CHRONICLE OF ONE BATTALION 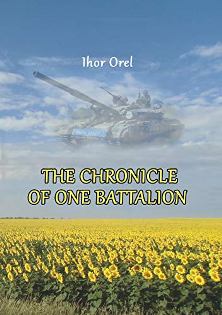 The world has entered an era of hybrid wars. For the first time, Russia used such a war against Ukraine in 2014.

As of 2013, Russia has established a Ukrainian government with Russian agents. Ukrainian civil society has revolted against the pro-Russian government on the Maidan. An interim government was formed in Kyiv. It was at this point that Russia annexed Crimea. The new government failed to resist the aggressor militarily, and the United States and Britain did not want to protect Ukraine, as required by the Budapest Memorandum on Security Guarantees in exchange for Ukraine's nuclear-free status.

In the spring of 2014, Russia began to destabilize the situation in the Eastern regions of Ukraine: to introduce paramilitary units, to import participants in pro-Russian actions across the border. It became clear that the Crimean scenario is used here as well. In the conditions of the collapse of the Ukrainian army, the movement of volunteers to defend Ukraine began. People with completely different motivations received weapons and, in conditions of paralysis of the authorities, localized the advance of Russian expansion. This book is about the formation and combat path of one of the first volunteer battalions…

Learning of the dramatic social experience of recent years in Ukraine, and especially the circumstances of mass unrest, the struggle for power, and war, encounters with methodological difficulties. The immediate participants of the events hide their true circumstances very often, and the large masses of the population are simply unaware of them. In this regard documents, created directly at the scene of events by their participants, gain importance. Documents, where the reality is impartial and critical. Such documents include this book.

The book is based on diary entries, which are supplemented by the author’s later comments sometimes (italicized). This avoids the false memory of even subjectively honest informants when some time has passed after the event.

At the end of August 2014, the situation on the front was changed dramatically due to the direct intervention of the Russian Federation.

Ihor Orel was born in 1961 in the town of Kadiivka (Stakhanov). Ukrainian.
In 1978 he finished secondary school. From 1978 to 1983 he studied in Komunarsk mining and metallurgy institute in the speciality ‘mining’. He got the profession of ‘engineer-teacher of mining disciplines’.
From 1983 to 1985 he was undergoing his military service.
From 1983 to 1990 he worked in the system of vocational education and training as a teacher and production study foreman.
In 1989 he was among the initiators of the establishment of the People’s Movement (Narodnyi Rukh) of Ukraine... more