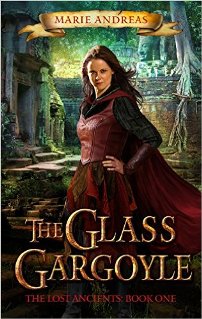 Archeologist Taryn St. Giles has spent her life mining the ruins of the elves who vanished from the Four Kingdoms a thousand years ago. But when her patrons begin disappearing too—and then turning up dead—she finds herself unemployed, restless, and desperate. So she goes looking for other missing things: as a bounty hunter.

Chased, robbed, kidnapped, and distressingly low on rent money, Taryn just wants one quiet beer and to catch her fugitive. But there’s more to Alric than his wicked grin—is he a wanted man or the city’s only hope? With menacing mages in pursuit and her three alcoholic faery sidekicks always in her hair, Taryn’s curiosity might finally solve the mystery of the elves… or be the death of her and destroy her world.

The Glass Gargoyle - Available from Amazon