The Harpy Chronicles - The Namari Book I 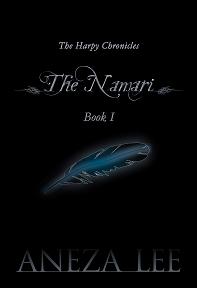 This is the epic tale of Kirin of House Dar’Shiel, the elfish daughter of an exiled priestess who must travel to the elfish high city to serve the goddess Alorana in her mother's stead. Long ago, her mother was charged by the goddess to wed a dark elf. A childhood trauma made the idea abhorrent, and the priestess fled with her infant daughter, child of her love affair with a light elf, to a world far removed from the magic of the elfish realm.
To save her mother from the debt she must pay to her goddess for disobeying her, Kirin embarks on the long road to I'lla Kalladûr, the elfish high city, in her place. Upon her journey she must learn what it is to be a Namari. This goddess-given gift of foresight makes her an invaluable commodity in a war between two elfin goddesses, one of whom will have her death, or her service.
A chance meeting with an enigmatic trader leads to an unexpected journey to meet her birth father. The handsome elf trader has a secret and is not who he seems to be, yet he has knowledge of the rare gift of the Namari. The intriguing trader is charged with escorting Kirin to the border of the elfin kingdom, to the Black Lands, home of the dark elves, traders in flesh and enslavers of mortals, elementals and elfkind alike.
Her path also crosses that of an injured harpy, a creature thought to exist only in myth, who is upon a quest to save her tribe from extinction. They free an enslaved lycanthrope from service to the dark goddess, Olunagh, and together they must find a way to thwart her destructive machinations and save their homeland from decimation.
Buy on Amazon
The Harpy Chronicles - The Namari Book I - Buy on SmashWords
ISBN:
978-1475062991