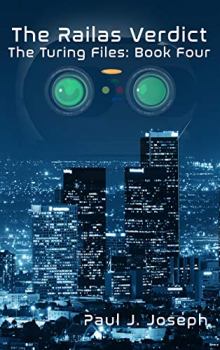 Everything in New Braintree was efficient, comfortable, and convenient, but tightly controlled by PACE, a technology provider with dark ambitions of global dominance.  And their proposed justice robot, MAX, is more of a politician than a judge, and lacks even simulated ethics.

Railas, now fully operational, is the only alternative.  He cannot be intimidated or bribed, and he was created to work against tyranny.  His team has high hopes to restore justice and defeat PACE.

But while Railas and his team investigate MAX and his motives, he finds something worse.  His mysterious creator, who vanished from her office on the space elevator, makes a surprise appearance in VR.  And her digital essence, coupled with something far away, may represent an unimaginable threat.

The Railas Verdict - Available from Amazon

United States
Paul J. Joseph is the author of The Turing Files, a series of science fiction books featuring robotics and artificial intelligence. Joseph has been writing science fiction for over twenty years and has demonstrated skills in self-publishing, including formatting, design, and multi-media production. He enjoys studying science and technology, and his hobbies include VR production, 3D...
Learn more about Paul J. Joseph