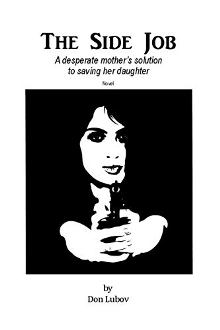 At 17, unmarried, unskilled, and pregnant, Maggie Gomez is abandoned by her boyfriend and evicted from her home by her parents. For five years, she leads a hardscrabble life on the underside of a Las Vegas ghetto, working at menial, minimum-wage jobs, to support herself and her asthmatic daughter. As her daughter's health declines, Maggie's need for money turns from needy to desperate. Either 5-year-old April gets an expensive operation, or she dies.

When she takes a new and dangerous profession; as a hitman for a local mobster,  Maggie's life becomes a soap opera of mixed emotions and dangerous ties. Things come to a head when she discovers that her detective lover is investigating her loan-shark boss…who, has put out a contract on her.

With the help of one of Frankie D's thugs, all of Maggie's unsavory connections to the Las Vegas underworld are violently canceled. She and Shawn and April survive ‘what happens in Vegas…' and remain in Las Vegas, together.

The Side Job is my first novella (110 pages). It features a mother's unlimited love for her child, and her rise from victim to predator. United States
I have been writing seriously since 2013. I have written for Yahoo Voices, Beliefnet.com, and Kinja.com. I have 6 books currently in print on Amazon and Barnes & Noble. I have taught art & design on the university level and spirituality on the college level. I was an artist for 34 years.
Learn more about Don Lubov

The House on Dundas and Vine

The Last Casebook of Doctor Sababa