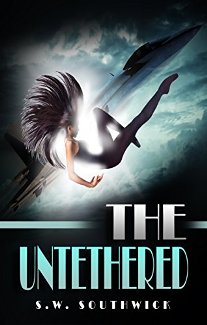 "[W]hen the price of peace with others is the surrender of one's highest values, conflict becomes one's greatest asset." The conflicts in Southwick's dystopia are disturbingly familiar, with elements that echo today's headlines.

In a world where most people are increasingly constrained to toe the line and give at least lip-service to the dual social concepts of Unity and Sacrifice, anyone who does not conform must self-identify as criminal, or become actively anti-social. Society regards either as negative, of course, and so the real choice is self-abnegation--accepting the values imposed by society--or isolation from it.

Young Roble Santos is anti-social, labeled delinquent,then abandoned to the foster system. Unlike his friend Danny Sands, the son of his last foster parents, however, Roble is never conflicted about what he wants. Given the choice between pursuing his dream of creating the ultimate jet plane or conforming, Roble rejects society's expectations and runs away. In his last interview with the head of Nevada foster care, he says:
"I don't need to hear how scary theworld is and how I shouldn't try anything. I don't need to know how much suffering there is out there," he pointed out the window, "or how bad I should feel about it. What I need..." he looked up, his grey eyespleading, "...is to see someone who is still happy after growing up.

If that sentiment seems familiar, perhaps you have read Ayn Rand's TheFountainhead or Atlas Shrugged. I felt that connection from the first pages of The Untethered, and began looking for deliberate allusions tothose novels. They weren't hard to find.

But if Howard Roark and John Galt are flawless, pristine exemplars of Rand's philosophy, they are less accessible for it. Roble Santos and his fellow objectivists (Libby Dodge, Halvern Black, Victor Lafayette, Nicolette Popov) pursue their dreams whole-heartedly, with total focus and absolute rejection of society's demands--yet they are not blemish-free. Their foibles make them human even while their accomplishments reveal they are something more.

The protagonists share something else, however: all their dreams involve something material, a creation which will not exist in the world until they create it. Roble Santos makes this material,objective reality obvious in one scene on an airbase in Okinawa:
"Sir, I know what keeps your adversaries at bay." Sircor folded his arms, muscles flexing under his uniform. Roble pointed at a picture of Sircor standing with a group of Thunderbird pilots. "Your piloting ability is real." He pointed at a model jet on the desk. "Your fighter jets and maintenance performance are real. That," he gestured out the window,"Skeleton Eagle sitting at Naha--is real. Those realities keep them at bay, sir."

On society's side of the conflict, criminals like Jesus Gorronza, politicians like Preton Moore, religious leaders like Randal Graph, and ordinary citizens like Donald Sands and his wife, give the required lip-service to the ideals of their culture, while feeding off whatever amount of power over others their actions can give them. Southwick gives these antagonists all the petty banality that such characters usually possess. It is also no surprise that many of them are in the government, or campaigning to be involved in
"[T]hat sweet, unlimited democratic system, allowing plunder at the drop of a vote."

The most revealing characters are those in the middle (Stock Brant, Alexa Patra, Danny Sands), who try to straddle the divide between the pull of their dreams, and the yearning to please society--or who embrace the idea that doing what pleases them makes them criminals. When laws are written by those who want above all to consolidate power over others and impose their own beliefs, pursuing your dreams may actually, literally, make you a criminal:
"There is no sanctuary against those who impose their beliefs on others through laws, not one single strip of dry land on this Earth."

Whether the goal is to feed the world--not by theft/taxation or by shaming donors into giving, but by creating more productive crops--or to teach children to think, to explore--rather than to compel them to parrot one's own thoughts--the concept of sacrificing one's individual identity into a collective group is ultimately destructive to both the dream and the person who dreams.

For everyone who wishes to fly, who yearns to soar (and to forget all those whose envy drives them to shoot you down), The Untethered is your next great reading experience. United States
"I find nothing to be more heroic than someone chasing their own dream against all odds." S.W. Southwick lives in Las Vegas.
Learn more about SW Southwick