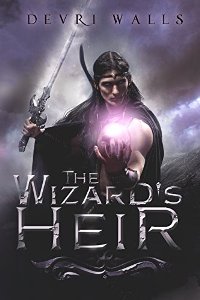 Tybolt’s a Deviant, a hated race immune to direct magic in a world where Wizards ensure survival. But when he loses his entire family to a spell-made storm he joins an elite group of Wizard hunters, organized beneath the new non-magic wielding king.

Now eighteen, he spends his days capturing Wizards. But the nights are his, reserved to feed the starving villagers of Eriroc under cover of dark. There’s always more people in need than he can help, and one of these days he’s going to hang for theft from the royal kitchens.

Although Tybolt and his fierce partner, Auriela, have imprisoned many Wizards, the one partially responsible for the storm that killed Tybolt’s family is still out there: Alistair. When an old informant claims to have information regarding their elusive prey, everything changes.

In a cruel twist, Tybolt realizes he isn't who he thought he was at all. How can he save himself, the people, and those he loves while keeping his secrets safe? Can he hide his true nature and allow the corrupt king to remain on the throne?

Or will he have to unveil himself and risk possible execution to save them all?

The cover of this book inspired me to write The Wizard's Heir. The art was done by Claudia McKinney from Phatpuppy art who also did all four of the covers for my first series. I saw the art in her portfolio and knew I wanted to write this guys story! So I bought the image first and wrote around it.