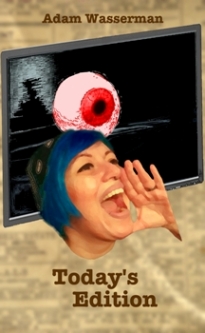 Greetings, citizen. Your interest in Today's Edition has been noted by the authorities. By electing to access illegal, detrimental and highly subversive material, you have identified yourself as a traitor. Please turn yourself in to your Homeland Security neighborhood substation. Alternately, you may choose to stay where you are, and someone will be by to detain you shortly.

Today's Edition does not exist. It has never existed. Rumors of a popular e-zine created by the Human Resources conglomerate and then spun off to the private sector for an outrageous amount of money are entirely false and should not be trusted. Likewise, no weekly publication in the Bunker was ever hijacked by traitors - repeatedly - as an instrument to achieve their own nefarious ends. Lastly, slander perpetrated against our most trusted and highly regarded citizens - those with an Alpha clearance - will not be tolerated.

How exactly you came to possess knowledge of Today's Edition and where it might once have allegedly been published is surely one of the topics your interrogator will be fond of discussing with you. Why you would wish to spend your time passing on dangerous rumors and gossip is another.

On that note, please be prepared to draw up a list of your fellow conspirators and which recent acts of sabotage, subterfuge, and calumny can be attributed to them.

Thank you for your cooperation.

Adam Wasserman is, by all accounts, a human being from the planet Earth. As such, he eats several times a day and breathes often.

He also likes to write. Already at the age of fourteen, he embarked on his first novel, a sci-fi space adventure about a teenage boy who is also the emperor of an alien race. Fortunately, his taste for topics has improved, and he now writes about adults trapped in underground spaces on other planets, stabbing each other in the back.

Mr. Wasserman does sometimes address more serious topics, however, and likes to feel that even his dark comedy has a... more