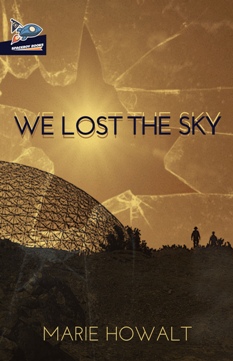 In the distant future when Tuscany is a desolate wasteland ruled by the forces of nature, Renn is abandoned by his fellow wanderers. As a dust storm approaches, he struggles to find shelter in the ruins of an ancient city. But he gets more than he has bargained for when he accidentally awakens a dormant creature which resembles the maddened Moon servants from his people’s legends.

Meanwhile, a teenage survivor of the lost civilisation is keeping an eye on his old home, the one remaining great city, Florence. Unlike the city dwellers who rarely venture out of Florence’s protective domes, he scavenges long-forgotten technology while looking for others from his own time. And now he is building an army of artificial humans outside the city that no longer welcomes him.

The Florentines reject advanced technology and innovation. Yet, a restoration worker strives to learn engineering and longs to find out more about the strange relics that turn up on her workbench.

She is caught between the city's, wealthy, protected neighbourhoods and its outer slums, determined to help the impoverished denizens. However, both endeavours mean working against her own father  and the ideology of the ruling class.

As tensions mount in Florence, Renn and an unlikely new travelling companion are drawn towards the city. But danger is lurking around every dune of sand. It is going to take more than luck to avoid suspicious settlers and survive the turbulent weather conditions and fierce predators longing to put a quick end to their journey.

TO THE RESCUE: Profits from sales of this book will be donated to Hjernerystelsesforeningen, the Danish Post Concussion Syndrome Foundation.

Three years and six months ago, I worked as a freelance translator and an English teacher here in Denmark. I also wrote a lot and had just finished serializing a novel on a website where I got to meet a lot of other writers and readers. I was getting ready to query that novel and edit another and start writing a new story too.

And then, all of a sudden, I wasn’t. I got a concussion. It wasn’t a serious accident that caused it, and I should have been fine after a few days. Or weeks. Or months. It did get gradually better. But it did not go away. The condition is called PCS (Post Concussion Syndrome). You can’t see it, but it means I get nasty headaches if I do too much. If it gets really bad, my motor skills suffer, and I can hardly string together a coherent sentence, but thankfully I’ve learned to pick up on the warnings to avoid the worst. The only thing that helps is rest. I’m like an old phone battery; I need recharging several times every day.

But it’s not all bad. It has provided me with a lot of healthy insights. One of them is how important writing is to me. I already knew it was important, sure, but having to plan and prioritize everything I do made me realize what matters the most.

WLTS was written persistently and passionately. I had to work out how to stay in the universe of the story so I could sit down and write every day I was physically able to. I found a new way of making a synopsis, took a lot of handwritten notes and drew my characters. It worked. In fact, this is the first novel where I have almost been in flow every time I put my fingers on the keyboard. I found out that at this point in my life, writing is both the hardest thing for me to do and the easiest and definitely the thing I need to do.

The profits of sales will be donated to Hjernerystelsesforeningen, the Danish PCS foundation. They support those who suffer from PCS and spread the knowledge of this invisible illness, so it’s my way of thanking them for their work.